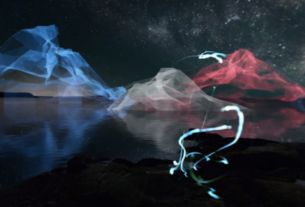 Created specifically for Google Cardboard and Samsung VR, the film’s opening shot places you in a remote location under a starlit sky. From here you can begin to look around, exploring your new surroundings.

Kim comments; “For me music instils memory, a moment in time, it can surround you, pumps through you, overrides your senses. The beat. The rhythm. The musician’s story. It’s insanely powerful. That’s how I approached the making of the DJ Starkey’s Satie music video. Virtual Reality captured the pure essence of how I saw this track play out in my mind. It gave me the opportunity to transport an audience into my visual interpretation of the track. I wanted to bring the audience into an environment that is already spectacular and let it slowly build into a surreal experience. As the beat heightens so does the visuals that surround them. Allowing them to get lost in the music.”

Visuals with deep gradients swirl and pulse around you, and carry you into the opening beats of the track. Kim used graphics and visuals to create a type of light show, and used the beats within the track to influence the lights movements within the 360 VR environment.

At the forefront of Virtual Reality work, Kim’s background as an illustrator and designer allow her to stamp each project with a strong aesthetic identity. She has worked with clients including BBC, MTV, Nickelodeon, Lego and Nissan.