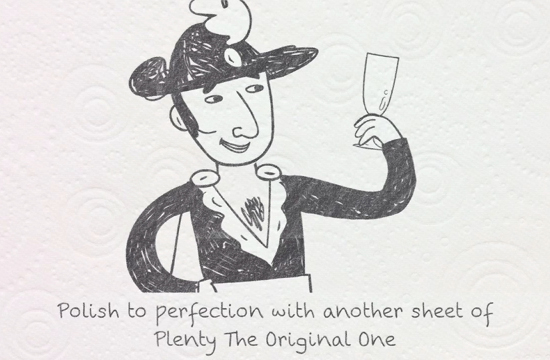 The interactive campaign, which is Plenty’s first major digital push in the UK is created by Publicis London. It comprises thirty online films, which launch on March 4th, on the brand’s new YouTube channel.

Everyone knows that behind every great man there’s an even greater woman. In these half-animated and half-filmed clips, Juan, alongside the woman who taught him everything he knows, reveals lots of ways to make the most out of Plenty household towel - from separating pancakes to filtering coffee grinds and many more.

Viewers are also asked to share their own ingenious tips on the Plenty Genius YouTube channel, where a gallery of the public’s own tips will be curated.

A launch plan has also been devised to drive prominence and awareness of the channel, through the line - from online paid for media and social media support, to press and shopper activations.

Nicola Coronado, the SCA Marketing Director UK, said: “We’re delighted to celebrate the fantastic and ingenious tips our consumers have shared with us on our new You Tube channel. We are proud to also introduce Juan Sheet’s Nonna to the world, in our first major digital push for the brand. The campaign shows just how indispensable Plenty can be around the home.”

Andy Bird, the Executive Creative Director at Publicis, said: “The new campaign for Plenty is designed to entertain, engage and be of practical use to its audience and we hope it will bring consumers even closer to this much loved brand.”