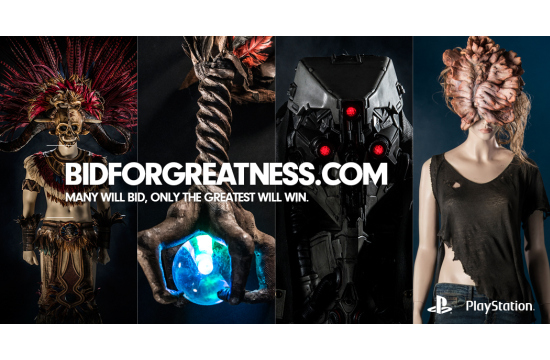 “Who are you to deny greatness?,” actor Taylor Handley asks in the :90 spot that PlayStation® released last month to kick off its new “Greatness Awaits” brand campaign, created by its AOR BBH New York. Beginning today, July 16, PlayStation is rewarding greatness and taking gamers deeper into the campaign with the launch of “Bid for Greatness.” “Bid for Greatness” gives the PlayStation community a once-in-a-lifetime opportunity to bid on props from the “Greatness Awaits” spot, using their gold PlayStation trophies (a gamer point system).

PlayStation will auction 15 of the most iconic items specially created for production of the epic “Greatness Awaits” spot, including Captain Kenways’ costume and cutlass from Assassin’s Creed IV® Black Flag™, the Sniper Outfit from Killzone™ Shadow Fall, the Witch Doctor outfit from Diablo® III and the Infected Clicker costume from The Last of Us. The auction will last from July 16 – July 31 with a new item auctioned every 24 hours.

As Sony PlayStation gears up for the PlayStation 4 debut later this year, the brand is rolling out the new campaign to invite gamers to explore the world of greatness that awaits. Building on gamers’ desire to find, consume and talk about never-before-seen content, the campaign launched last month with the introduction of an integrated film and digital experience that invited gamers to discover hidden content that now includes the “Bid for Greatness” auction

Moreover there’s an immersive online experience, housed on the PlayStation brand YouTube channel, invites gamers to explore nine frozen moments in the “Greatness Awaits” film and discover 20 “Gateways” that lead to exclusive content and additional “Easter eggs.” Tapping into the 'search and find' behaviour of gamers, the experience allows gamers to engage with the brand on a deeper level.

Check out “Bid for Greatness” at: bidforgreatness.com