Plants vs. Zombies Part 2: It's About Time! 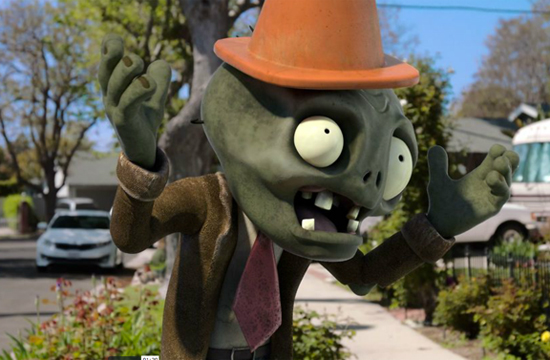 The long-awaited Plants Vs. Zombies Part 2: It's About Time! game from PopCap Games launches late summer, with a new trailer created by Wolf & Crow.  The sequel finds the original character Crazy Dave traveling through time trying to relive eating a delicious taco while fighting off brain-eating zombies.  The trailer is a day-in-the-life of Dave as he escapes a Plants vs. Zombies skirmish in his RV time machine, Penny.

PopCap Games greatly expanded the cast of characters for the new edition, which the gang at Wolf & Crow cleverly introduce in the the trailer, showing the characters training for zombie battles and giving clues to where this latest installment will take gamers.

View a making of below:

Wolf & Crow dove into the challenge of capturing the essence of the unique 2D characters and transferring them into a 3D world. Live action plates were shot and matched precisely to the actions of the storyboard animatic, relying heavily on reference photos to recreate the 3D environments.  Several high-dynamic-range images (HDR) were captured to generate image-based lighting.  Once the 3D plates were tracked the animators went to work breathing life into the characters. The same HDR images were then used to match the light on the live-action environments for a seamless integration of the CG and shot footage.