Planners: You Can Learn A Thing Or Two From Comedians 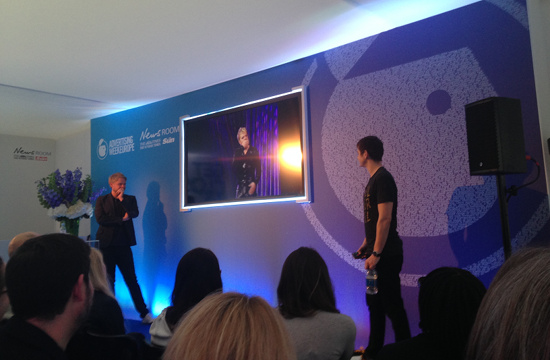 Last summer Holler's Head of Strategic Ideas, Jonathan Fraser, walked into the agency's planning department and told each planner that they would be performing in a London comedy club in one month's time (you can see some of the results in the video below). One of them resigned, but he's sure the two things weren't related.

Today at Advertising Week Europe, occasional stand up Fraser took to the stage alongside Holler Co-founder and Leo Burnett Global Head of Social and Mobile, James Kirkham, to reveal what planners can thieve from comics.

Good planners, much like comedians, "study details, find a golden piece of insight and turn it on its head," Fraser said. Take DDB UK's famous 'Walk of Shame' Christmas spot for Harvey Nichols, in which they took the topic and turned it on its head to say you can still look awesome the morning after. Fraser and Kirkham proceeded to show a clip of comedienne April Macie doing just that, joking that men celebrate the situation and women should do the same.

So what can planners steal from comedians? "We've come up with a list of around 100 things that planners can take from comedians," Fraser said. Restricted to 30 minutes, though, he and Kirkham couldn't divulge the full extent of their comedic wisdom but they did deliver some gems.

Planners can steal from comedians' insights

McVitie's just had to type in 'Rich Tea' to YouTube to get its struggling, iconic biscuit brand on the up. The brand would have stumbled across this sketch from Peter Kay, paving the way for a dunking successful campaign.

Planners can steal the way comedians stretch their thinking

Comedians take an idea and stretch in every way possible, like Eddie Izzard does in this clip on the Death Star. Cadbury did the same when its 'How do you eat your Creme Egg?' campaign had run its course, and they launched the very Bunny Suicide-esque 'Release the Goo'.

Young Jack Carroll (at two minutes in the below film) knows what his audience is going to be thinking. After its torrid time in the 1980s and '90s Skoda anticipated that it couldn't get it away with seductive shots of wings of cars like BMW and Mercedes could. Instead it had a bit of a laugh at itself.

Planners can steal the way comedians highlight their punchlines

When delivering insights to clients, planners need to build and tease the idea until delivering the ultimate crescendo, just as comedians do to their audiences.

"Deliver in threes, it's an age-old trick," said Fraser.