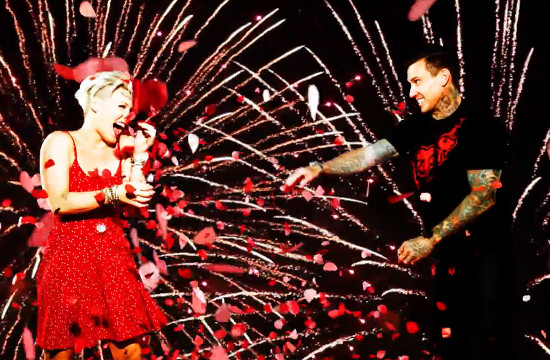 Sophie Muller and Black Dog Films bring you Pink's latest music video for her track "True Love" featuring Lily Allen.  In the tongue-in-cheek clip, we hear Pink sing of marital frustrations and how her life has become all "snot, tears and poop" since the birth of her daughter.  Naturally, both Pink’s husband, Carey Hart, and their daughter, make an appearance.  A pig-tailed Willow can be seen playing with stuffed animals and riding bikes with her parents, as Pink and Hart act out moments from the song in a series of Roy Lichtenstein-style pop-ups.

Allen’s cameo marks her first appearance in years, as she sings her parts of the song while angrily chopping carrots with a sharp knife.  The vivid music video is complete with tour footage of Pink's impressive trapeze act.