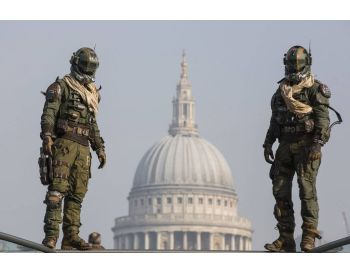 Artem SFX were approached by Xbox and Sculptivate to create two replica 'Titanfall' costumes for the EMEA launch held in London. The replica pilot suits were worn by freerunners who performed at the event mimicking the actions of the game characters.

Artem had just 9 days to create both suits from scratch. The amour and helmets were drawn up in 3D on a computer aided design (CAD) program. The design was then converted and cut using a CNC machine and constructed on Artem’s in-house 3D printer, which prints layer-upon-layer to create a solid object from an image. Finally Artem used a Kuka robotic arm, a large 7-axis robot that can machine 3D objects with an accuracy of 0.2mm – Artem has one of the most advanced robotic arms in the UK today.

As the armour needed to be both lightweight and safe for the freerunners to perform in it was moulded and cast in foam. The pilot’s helmets were cast in fibreglass and LEDs were placed inside to bring the characters to life. The chest plates were also created out of fibreglass and were fitted with glowing cylinders to mimic the video game graphics. Artem’s aim was to recreate these models as accurately as possible – many of the team were Titanfall fans themselves and they thoroughly enjoyed the challenge. 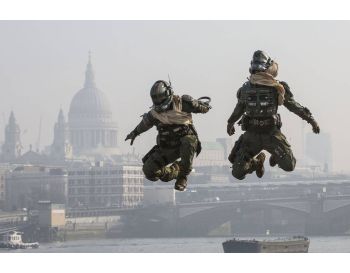 This project follows Artem’s previous success of creating multiple suits for Microsoft’s multi-billion dollar video game franchise, Halo. Artem created four Master Chief suits for the Halo 4 launch and prior to that three Spartan suits for the launch of Halo Reach; one of which was worn by The Rocket Man as he jet-packed across Trafalgar Square. These were required to be equally as accurate and durable as actors wore them at events across Europe including the takeover of Lichtenstein for the launch of Halo 4.