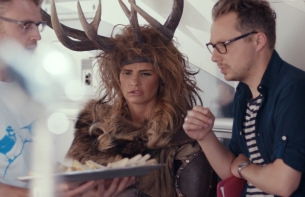 As the nation’s favourite game, Lotto is a key contributor to the Good Cause Projects which The National Lottery helps to fund. In developing a new Lotto campaign, following the successful ads to introduce a new re-invigorated version of Lotto in 2013, Camelot challenged AMV to create work that would once again really get the nation talking.

In response, AMV have produced a campaign rooted in the insight that everyone has dreams, and that deep down they’d rather their dreams were realised over other people’s. By bringing the ridiculous dreams of celebrity players to life, this campaign plays on the fact that sometimes, it might be better for the nation if certain people’s dreams stay as just that: dreams.

The campaign, which broke on Saturday on Piers Morgan’s twitter feed, is truly integrated, with POS, Online, Social, Print, OOH, Radio, and TV. The first phase of the campaign features Piers Morgan and his plan to destroy a beautiful stretch of British coastline, Camber Sands, in order to build a pier dedicated entirely to himself. Katie Price is the second celeb banking on Lotto to make her dream - a 24 hour, unavoidable TV channel featuring her in every programme - come true. The nation is invited to play Lotto in the hope that they are able realise their dreams over those of our celebrities. Across every touch point, the hashtag #PleaseNotThem serves as a rallying cry, connecting the nation’s conversations as they unite against the potential disaster caused by the celebrities’ dreams.

As the campaign develops, the nation will begin to realise the true horror of the situation as a number of other celebrities reveal their own audacious dreams. The only hope the general public has is to play Lotto and hope that it’s their dreams that come true, not the celebs.

Because as always, Play Makes It Possible.