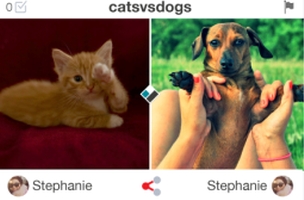 Duel, a new competitive photo-duelling app, has launched in the UK after a successful beta stage, and after winning the KITE Startup Pitch for Brand Partnerships at SXSW 2015, which was judged by executives from Unilever, L’Oreal and Coca-Cola.

The beta app already has a dedicated user-base who ‘duel’ everyday, and it is currently being trialled at The O2 arena, around sport and entertainment events. It has been hailed as a game-changing idea by Joining The Dots, a support programme for musicians that is funded by the Arts Council and The Guardian.

Dubbed the “illegitimate child of Draw Something and Snapchat” by its creator Paul Archer, Duel revolves around pairs of images, with a game-like element that requires at least two people in order to play.

Players can either upload a single photo, give it a title, and then challenge their friends to respond with their own image, or they send their friends a pair of ‘duelling’ photos, and ask them to decide which they prefer. Players can ask for decisions on anything, from what to wear, what to buy, to where to go, and in turn they get to influence the outcome of every Duel they see. There are no comments, no likes, players simply vote for the best. The app is designed to encourage high levels of engagement on a regular basis.

Players are able to share their Duels via any social platform, and their friends, fans or followers can vote on the Duels within those networks.

Duel was created by Daredevil Project Studios, which is based in Bristol and Greece, and makes mobile and social products that encourage people to have adventures. Daredevil was founded by Paul Archer, a double World Record holder. Duel was incubated at WebStart Bristol and SetSquared, was picked to be a resident at Bristol’s famous Pervasive Media Studios and has won a place at a Microsoft Venture’s Microsoft Innovation Centre.

Paul Archer, founder of Duel, said; “Duel is an antidote to shouting into a social media abyss - it's a photo-duelling app that people can play with their tight network of friends, the ones that really matter to them. Those people whose opinions people actually care about. Having travelled around the world in a black cab with my best friends, which was ridiculously difficult but also fantastically fun, I was inspired to make an app for my friends and I to challenge each other via our phones.” The app is not just aimed at groups of close friends, but also at the rising number of ‘super user’ You Tube and Instagram stars and the brands that court them.

Paul Archer added; “We've created Duel hand in hand with the new generation of Internet stars, because they see their fans as their friends – it’s how they build their networks, and so they have a very direct relationship with their followers. Duel integrates with their existing social platforms, and offers interactivity and engagement in a way that no other photo app is doing.”

Stephen Fraser, Social Media Manager, The O2, said; “I’m excited about Duel, particularly for brands looking for a new way to engage with that elusive millennial market.  It’s bold, irreverent, playful and addictive – everything you want in a game-changing app.”

Duel is backed by the high-growth tech arm of Downing Ventures.

Matt Penneycard, Head of Downing Ventures, commented; “Duel is an extremely attractive proposition for brands, influencers and enterprises that are desperate for more affective ways of reaching digital consumers.”