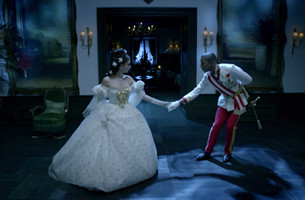 Supermodel Cara Delevigne and Pharrell waltz their way through this seven-minute long Chanel film by Karl Lagerfield. The legendary Chanel designer created and directed the film to accompany the Chanel Paris-Salzburg 2014/15 Métiers d’art collection, which was shown to a select few yesterday.

The film features Delevigne and Pharrell drifting off into a fantasy world as guests of the hotel in which they work head off to bed. They proceed to dance together while singing ‘CC The World’, the track that Pharrell wrote and composed specifically for the film.

When the fantasy ends the pair return to their day jobs. Coco Chanel approaches Pharrell to enquire from where he got his bellhop jacket, to which he says: “They only made it for me.”

“Well I am going to make it for me,” Chanel replies.