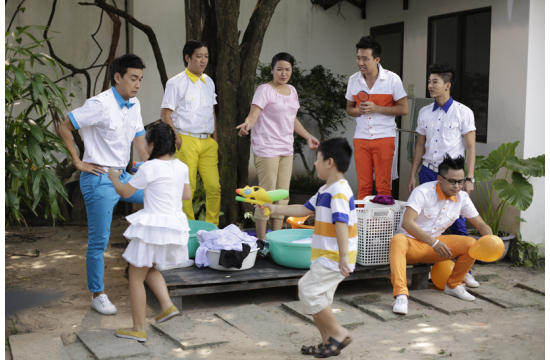 Leo Burnett recently kicked off an online campaign to launch P&G’s new Tide Plus Liquid detergent in Vietnam. Designed to entertain, the campaign features a series of webisodes which tells the story of a five-member laundry detergent ‘special task force’ who rescue ladies of their laundry woes.

The special task force “Biet Doi Sieu Toc” (Fast5 Force),  named after Tide Plus which provides five times faster cleaning over powder detergent, are played by Tide’s new celebrity endorser, Tran Thanh (as the leader of group) and four other well-known local actors. Fast5 Force’s key ability is its exceptional fast cleaning abilities as well as an obsession with whiteness.

Each webisode features an interesting real-life scenario commonly faced by modern Vietnamese women surrounding their need for fast laundry solution. In the first webisode, the story revolves around a young wife trying to win the heart of her mother-in-law. Tapping into the insight that Vietnamese women typically live in the house of her husband’s parents, this story resonates with the audience, albeit with a light-hearted approach.

With Tran Thanh’s renowned humour and acting skills, each story presents a fun and unexpected twist where Fast5 Force will do whatever it takes to help these women fully overcome their dilemma. In the second webisode, for instance, the group was transformed as stars of a Korean drama series to fill in the television episode that the protagonist missed because of her laundry chore. Dialogues of the script also injected trending languages with bits of current events, enhancing the comical aspect and relevance of each plot.

According to Samuel Yau, marketing manager at P&G Vietnam, “The challenge was to captivate women’s attention from the overwhelming clutter of online advertising while reinforcing the new “cheeky” character of Tide brand. With the fun, entertaining viral approach that is unexpected from a laundry brand, this campaign has been gaining positive momentum in the market.”

Vietnam currently ranks highest in the region for hours spent per visitor on online entertainment at 5.3 hours (source: Comscore Southeast Asia Digital Trends 2013). P&G is tapping into this opportunity to effectively deliver its message through non-traditional medium of advertising for laundry category, particularly in Vietnam.

“The campaign is able to provide Vietnamese women comic relief from their painful household chores though the humorous branded content that resonates with their everyday life and for which they can relate to. From its launch, the webisodes are spreading online organically, surpassing the campaign’s initial expectations and generating countless favourable conversations about the brand in women’s social forums,” said Kate Bayona, Head of Digital in Leo Burnett Vietnam.

All four weekly webisodes are available online via Tide VN’s YouTube channel, www.youtube.com/tidevn. The campaign utilizes YouTube, Facebook and Webtretho, the largest women social portal in Vietnam. Taking advantage of Webtretho’s millions of registered women members, a microsite is hosted in the portal for the campaign (www.bietdoisieutoc.webtretho.com.vn) where engagement is taking place.