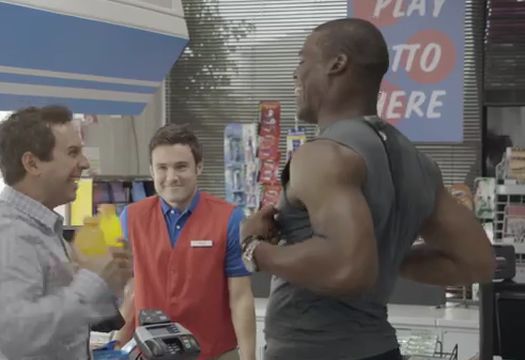 Peyton Manning, Cam Newton, and an unwavering convenience store clerk help Gatorade take a stand for when and how their product is consumed. You gotta sweat it to get it. You gotta burn some, to earn some. No exceptions.

The campaign features 8 individual online videos, as well as “Sweat It To Get It” signage in over half of all Gatorade convenience store retail locations through the NFL Pre-season & regular season.

The deadpan store clerk is played by Rob Belushi, nephew of the late John Belushi. Shot on location at an actual convenience store with over 15 hidden cameras, the campaign was directed by Jody Hill, known for films and TV programs including Eastbound & Down, Observe And Report, and The Foot Fist Way.

“Gatorade was invented to replace what athletes sweat out. So the intent was to create something that might cause someone who reaches for a Gatorade to think, “Hold up…have I earned this?”, said Brent Anderson, Executive Creative Director, TBWA\Chiat\Day LA.