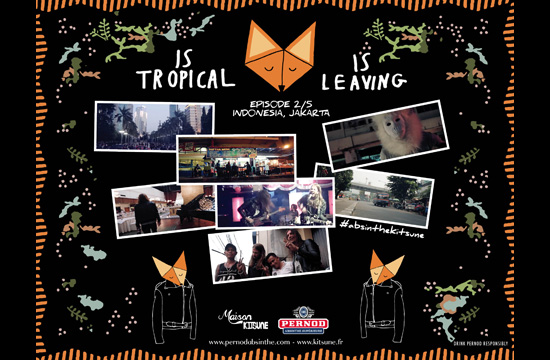 In the five-part series, Maison Kitsuné will unveil how they find inspiration watching new horizons, new faces, unknown cities around the world. For the premiere episode, which makes its debut on Life+Times, they decided to embark UK band Is Tropical into a journey that highlights the movers and shakers of the local creative community of forgotten capitals such as Reykjavik, Djakarta, Accra, Lima, and Amman.

After a launch in New York City at the Maison Kitsuné store on October 15th where they unveiled the new design of their second limited edition bottle, you can watch the first episodes of the project now.

“For our new collaboration with Pernod Absinthe and Maison Kitsuné, I wanted to have a pattern that was even more gentle than the previous edition, combined with a slight touch of japanese refinement and shaken by more rockn’roll elements” said Gildas Loaec co-founder of Maison Kitsuné.

“Forward imagined a concept where the Pernod Absinthe bottle is the digital key of a musical and video content ecosystem of exclusive assets. The bottle is not only a container but is also a true source of content. It’s a Digital key to access to “Is Tropical” exclusive song, which is the soundtrack of this unique concept, searching for the new sources of inspiration, discover unique cultures, embracing a non conventional creative community.” said Alexandre Sap, Co-founder of Forward, agency of record and campaign’s executive producer.

“Conformity can only be shaken by wicked adventures. Overdose of conformity kills people imagination. This is the heart of our communication and the way we briefed Forward and Kitsuné for this campaign” said Guillaume Petavy Meynier, Global Brands Director of Pernod.“This not only the new Absinthe by Kitsuné, It’s a music documentary. It’s also your ticket concert, your access backstage. This is not only a bottle of great Absinthe, it’s a Rock n Roll hit single” adds Mr Petavy Meynier.