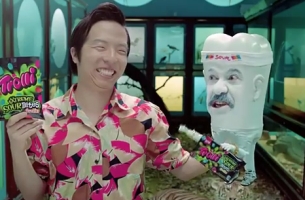 Los Angeles-based Central Films North director Rodrigo Garcia Saiz teams up with VFX shop Zoic Studios to infuse a high school science lab with awesomely augmented gummy worms in the new 30 second “Sour Brite Crawler Minis” for Trolli out of Periscope, Minneapolis, MN. The spot features a quirky science teacher leading his class on a dissection of the Sour Brite Crawler—native to “Trollidad”—while the students peer down at the larger-than-life neon gummies before them. As one remarkably eager student prods her specimen, the worm begins to bubble and then erupts in a rainbow explosion of the “baby” sized sugary delights. The entire classes relishes in the shower from the apparently pregnant crawler of delectable minis as the teacher gleefully exclaims, “I’m a daddy!”

The campaign also includes the 15 second “Feed Your Sour Tooth” that features a peculiar young man whose self-proclaimed sour tooth turns out to be a personified molar with a bit of sass. A final spot, “Dino” will air on July 1st.