Trends and Insight 557 Add to collection

In-house agencies, social influencers and inexplicable cellos… LBB’s Laura Swinton tries to get her head round that Pepsi ad 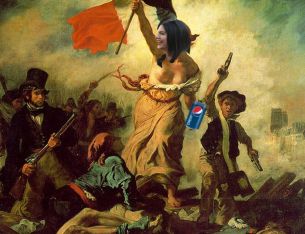 “Protests are so hot right now.”

“That photo of the girl and the cop at Baton Rouge did well on social media, let’s do our own version but with Kendall Jenner and a can of Pepsi?”

“I don’t know about you, but I would totally write ’Join the conversation’ on a placard if I was going to protest something I deeply cared about.”

“You know what’s a good instrument for parading around the place? The Cello.”

Yep, I'm still trying to figure out exactly what Pepsi – their marketing department and the team at in-house agency Creators League - were thinking when they conjured up the leaden thud of an ad campaign that cast Kendall Jenner as a Liberty Leading the People.

It’s a campaign that stretches the old PT Barnum maxim about there being no such thing as bad publicity to its absolute limit; it’s had coverage on more or less every major media outlet in the world… none of it good. Plus every wag with rudimentary Photoshop skills has had a go at turning it into a crappy meme. But, hey, maybe it’ll do wonders for brand recall? (Someone should run the books to see whether the ad results in a sales plunge, spike or plateau for Pepsi – the results could be sobering for the industry.)

There’s just so much to choose from when it comes to taking pot shots. The blatant co-option of Black Lives Matters imagery. The vapid cynicism of the very Stepford protest (the placards are more vacuous than Father Ted’s).  The paint by numbers formulaicness. And – sorry to harp on – the damn cello. Seriously. Who decided that a cello, the third least mobile instrument of all instruments, made any sense whatsoever?

In an episode of Channel 4's Father Ted, the priests were sent to protest against smutty film, and even their deliberately anodyne banners read like searing polemic compared to the ad's 'Love' and 'Join the Conversation' banners.

And then there’s the ad-industry specific stuff. My Facebook feed is veritably overflowing with rather-pleased-with-themselves ECDs posting articles from last year about Pepsi’s content agency trumpeting the merits of going in-house, or indeed Pepsi execs ripping into the agency model. The point they’re getting at is that if cutting out the agency makes for frictionless efficiency, then maybe that friction wasn’t such a bad thing after all. Maybe those precious agency creatives fighting for seemingly innocuous details like, I dunno, the core of the idea, are onto something.

Does it mean that in-house agencies are inherently bad? I don’t think that you can draw that conclusion from a sample group of one. However, it does provide a lesson (an expensive one) to other brands and marketers. If you end up in a situation where you get everything you want, you may find that you don't particular like what you end up with. Steamrolling over creative, talent and insight is a surefire recipe for work that's bland, even offensively bland.

The spot also raises questions about the cult of the influencer. People like Kendall Mint Cakes, with their thousands -or even millions – of social media followers are touted as the key to tuning into smart, sophisticated millennial audiences. But, just as Disney found with video game vlogger PewDiePie last month, sometimes these brand-influencer relationships are more complicated than they initially appear – and no matter how big their ready made audience is, if the tie-in isn’t rooted in a genuine sense of shared values then it can seriously backfire. If Pepsi’s campaign had been shot-for-shot the same, but without the celebrity turn, then there just wouldn’t have been the news hook for the likes of the BBC, CNN, the New York Times and the like.  What’s more, as a model and reality TV star, Kendall isn’t particularly known for taking a stand on anything publicly – she’s a poster-child, from a reality TV show family, synonymous with shallow consumerism. Her appearance is jarring in an ad that’s – superficially – about people power.

Which leads me on to the next thing: the aforementioned Stepford protest. Brands getting involved in ‘issues’ is something that we’ve sort of accepted. Just check out International Women’s Day. Brands were all over that, and several came out fairly well from that. The ‘Fearless Girl’ statue from McCann NY for financial services firm State Street was embraced immediately – and while a few grumblers dismissed it as cynical, the response was largely positive. It was a company making a statement about itself – and taking a risk by creating a standard for itself to live up to. With the Pepsi ad, on the other hand, we see a series of actually quite astonishing mental gymnastics that have been realised in order to cash in on recent popular protest movements (Women’s March, Black Lives Matter) without actually taking any sort of position on anything.

Easy as it is to rag on the campaign, I have to admit I feel a bit bad for the people involved too, in particular the juniors. I mean, I’ve fucked up plenty in my career but the BBC didn’t choose to write about that and I’m pretty sure my Mum never saw it. It’s one thing to do an ad that’s a bit shit; it’s another for it to be universally panned and then pulled. I don’t think it’s actually the shittiest ad ever made, is it? It’s just totally meme-able, for all the wrong reasons.

Ultimately it’s a valuable – and timely – lesson about the importance of protecting great creative. The spot feels like a checklist of algorithm-friendly features and yet (surprise!) it has flopped seriously hard. If there was an interesting thought or idea somewhere at the beginning of the process, it’s been ground down and rounded off to avoid risk and offence – and has, ironically, ended up causing a fair bit of offence. There’s so much talk in the industry about data-driven creativity and while, in the right context, that’s probably quite useful but if no one is fighting for wild, brilliant, exciting creative, we’ll see more and more sausage factory-fayre. 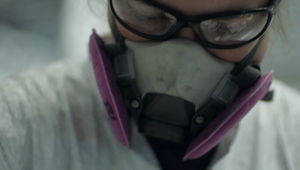