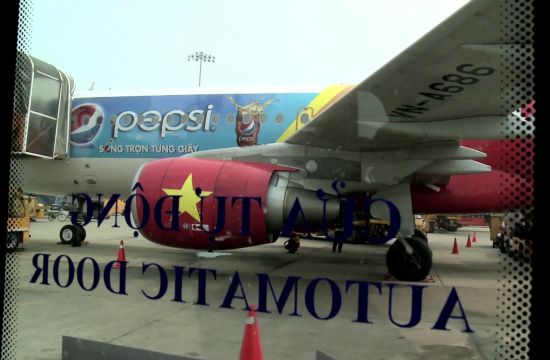 BBDO Vietnam and Pepsi have teamed-up to share the joy of returning to one’s home over the Vietnamese Lunar New Year, known as Tet.

The campaign which follows Pepsi’s ‘Tet Tron Tung Giay’ (Tet for Now) work, shows the brand not just communicating the joys of family and Tet, but also helping some actually experience Tet, by reuniting them with their loved ones.

In the campaign, Pepsi branded a plane, and chartered two flights (a total of 324 seats) to give to deserving students and low-income workers in Ho Chi Minh City who wouldn’t have the means to return to their families’ homes in Vietnam’s central region – the area most hit by harsh weather and floods this past year. Many of the ticket recipients had never been on an airplane before.

The flights also had entertainment from Pepsi brand ambassadors. A traditional Tet snack with Pepsi. A special announcement from the pilot and flight crew. And each traveller received ‘li xi’ (lucky money) in blue envelopes and other traditional Tet gifts to take to their families.

To add even more joy to the campaign, Pepsi also helped bring some of the ticket recipients’ families living far from the city to the airport to surprise their unsuspecting loved ones when they arrived.

“We think it’s important to recognize that not everyone can return home to their families for Tet.” said Trinh Viet Anh, Marketing Manager – Cola. “Pepsi is proud to be able to reunite families during Vietnam’s most important holiday. And to be the first brand to do so on such a scale.”

David Smail, Chairman and Executive Creative Director of BBDO Vietnam said, “It’s not very often that you get to work a campaign that is so meaningful for so many people. Executing it was a challenge, given the locations and logistics. But with the collaboration of the Pepsi team, PR, production and activation partners, and our team, it was all worth it seeing the families reunited in front of us. There wasn’t a single dry eye at the airport.”