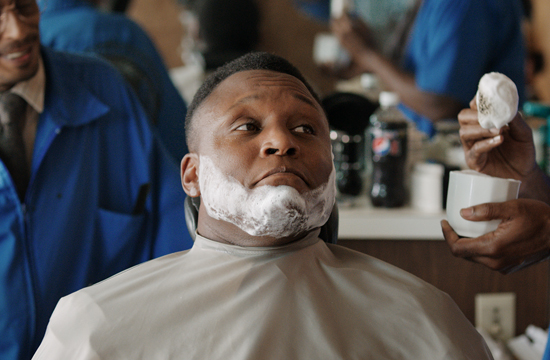 Pepsi MAX has launched a new TV commercial to support its latest, and biggest, gaming campaign.  Debuting just ahead of the official NFL season, the ad, titled "Disappearing Sanders", is the television expression of the current Pepsi MAX promotional campaign bringing excitement to fans by inviting them to unlock a legendary player in the Ultimate Team mode in Madden NFL 25, which hits store shelves August 27.

"Disappearing Sanders" is set to air starting August 19 with primetime broadcasts on all major cable networks.  The commercial features Hall of Famer and face of the Madden NFL 25 cover, Barry Sanders. The spot, produced by TBWA\Chiat\Day LA and directed by Matt Dilmore, encourages fans to get in the game with Pepsi MAX and Madden NFL 25 and captivates audiences with one of the most frequently asked questions in NFL history – why did Barry Sanders retire in his prime?

"Pepsi MAX is always seeking ways to bring fans the newest and most coveted experiences in sports and gaming and this partnership with Madden NFL 25 accomplishes that," said Joanne Nicoletti, Senior Brand Manager for Pepsi MAX.  "We wanted to create an ad that gets our fans excited about experiences that only Pepsi MAX can deliver.  We were fortunate to team up with legend Barry Sanders, a longtime Pepsi supporter, to help bring the game to life for our fans."

Pepsi MAX's new ad promotes the brand's sweepstakes and the opportunity to unlock a Madden NFL 25 Player Pack in Ultimate Team mode featuring a variety of NFL legends.  To participate, a valid code from Pepsi MAX packaging must be used for either a Player Pack or entry into the sweepstakes by November 1, 2013.  The sweepstakes invites fans to enter for a chance to win the grand prize trip to Madden Bowl XX, which includes a meet and greet with a participating NFL player.  Additionally, there are numerous supporting prizes from EA SPORTS and the NFL.  For a complete listing of rules and more information, visit www.pepsimax.com/maddenlegends.

Earlier this year Pepsi MAX and EA SPORTS teamed up for the much anticipated cover vote of Madden NFL 25 hosted on ESPN.com.  Legendary Hall of Fame running back Barry Sanders came out on top of the 64 players, a mixture of current NFL players and legends, who were in the running for the cover. The game, honoring the Madden NFL franchise's 25th anniversary, is available on August 27.

Pepsi MAX has maintained its stronghold in the sports category through exciting partnerships with NFL players, teams and more.  Additionally, Pepsi MAX is an official soft drink of the NFL within the greater Pepsi portfolio.