Pepsi Max & AMV BBDO Bring Some Oomph! to London for the NFL Weekend 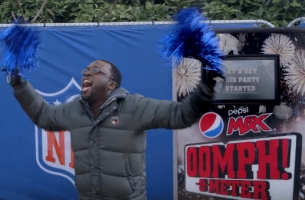 Bringing the U.S. passion for NFL alive Pepsi Max has created an oomph!-ometer, which will be at NFL on Regent Street (24th October) and the International Series game between the Jacksonville Jaguars and Buffalo Bills at Wembley (25th October).

Pepsi Max, an Official Sponsor of the NFL, has put a genius twist on the traditional vending machine to excite the traditional, stiff-upper-lipped British fans and whip them into an American frenzy. Consumers can partake in four challenges where only the most enthusiastic will be in with a chance of winning NFL tickets.

From high fives to chest bumps, the oomph!-o-meter will challenge even the most fanatical Brit to give it some oomph!

Alex Nicholas, Senior Brand Manager at Pepsi Max says: “Pepsi Max is proud to support the NFL International Series at Wembley and this year we wanted to find a genius way to make us Brits let loose and embrace the American enthusiasm…what better way than to create a vending machine in which you have to pay with enthusiasm!”