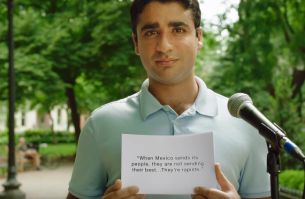 Donald Trump has made his political career on saying things that no other candidate would say —and most Americans wouldn’t say, either. So why, asks a new set of campaign ads from EMILY’s List and Priorities USA, would we let him speak for all Americans as president?

The new ads, created by agency SS+K, start with a simple premise: trying to get people on the street to read Donald Trump’s statements out loud. But most of the people interviewed refused to repeat his misogynistic, racist and crude statements. “I don’t feel comfortable saying this,” one woman says.

The program begins with a $1.5 million investment in digital programming in nine key battleground states, highlighting how Donald Trump’s worldview goes against everything that millennials stand for. It’s the first in a series of general election digital ads for a $20 million joint effort between EMILY’s List, a PAC devoted to putting pro-choice Democratic female candidates in office, and Priorities USA, a PAC that is supporting Hillary Clinton in this election.

The campaign will start running during the Republican National Convention. EMILY’s List and Priorities USA’s campaign will seek to inform millennial women of Donald Trump’s long record of offensive, derogatory comments and how a Donald Trump presidency could impact their lives and the people they care about.

“Young people across the country could never imagine saying the derogatory, racist comments from Donald Trump, let alone having a president who says them. The values that millennial women stand for and the future that they want hang in the balance this election—but they also have the power to do something about it,” said Denise Feriozzi, EMILY’s List Deputy Executive Director.

Rob Shepardson, founding partner of SS+K, said: "Young women have a set of values that are the complete opposite of Donald Trump's — both in their daily lives and in the world they want to create. They reject the hatred, bigotry, sexism, racism and divisiveness he represents. The stakes of this election couldn't be bigger, which is why young people will keep Trump out of the White House.”

"We didn't want to just have people say Donald Trump quotes, but rather show the hesitation and conflict of being asked to repeat the quotes. It shows how unfathomable it would be to have him as our president. We simply don't want to repeat the things he says," commented Bobby Hershfield, CCO of SS+K.