Pele, Ronaldo and Ronaldinho Celebrate the Art of Futebol 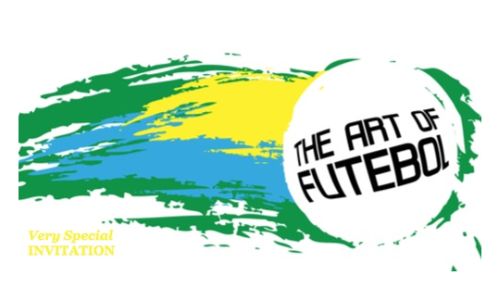 Art and Sport collide this summer for ABC Trust Art of Futebol, with footballs signed by some of the biggest stars of Brazilian and British football transformed into unique works of art by some of the most exciting contemporary artists working today including Rob & Nick Carter, Patrick Hughes, Pure Evil, Pakpoom Silaphan and Cibelle.

The balls will be displayed in the World Cup Walkway at Selfridges on 23rd June until 9th July on the LG Floor. On 10th July the balls will be auctioned off in a private event at the Brazilian embassy by a celebrity host and professional auctioneer. Proceeds from the auction will go to Action for Brazil’s Children Trust (ABC Trust), which supports grassroots community projects to transform the lives of the most vulnerable kids in Brazil. 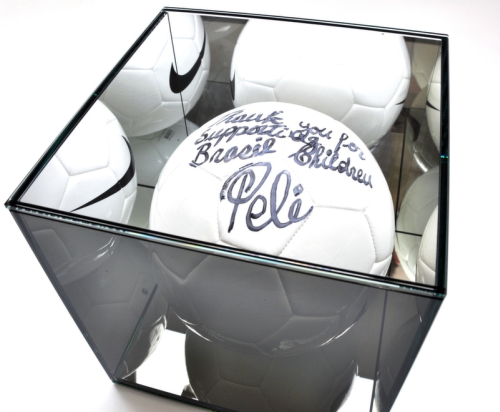 The dream teams of footballers and artists are; David Luiz and Inkie; Falcão and Pakpoom Silaphan; Neymar and Richie Culver; Oscar and Tolleck Winner; Romário and Cibelle; Pelé and Rob & Nick Carter; Raí and Pure Evil; Ronaldo and Nasser Azam; Ronaldinho and Patrick Hughes; Ramirez and Jimmy Galvin; and Zico and STATIC.

ABC Trust works to ensure every child has the right to, and the reality of, a safe childhood, a good education and opportunities to reach his or her potential. They use sport and art through local community projects to protect and empower at risk children and young people and provide them with positive role models. Patrons of ABC Trust include; Pelé, Brian May CBE, Jeremy Irons, Carlos Miele, City of God Director Fernando Meirelles, artist Romero Britto, musician Bebel Gilberto and musician Julian Lloyd Webber. 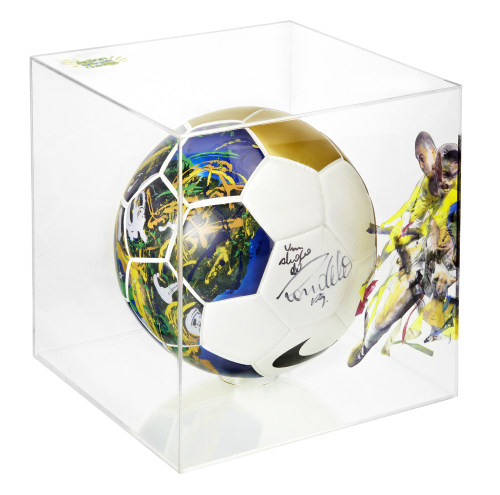 Chief Executive, Tiffany Garside, said of the Art of Futebol project: "Through 16 years of working in Brazil, we have seen first-hand the unique way in which sport and art can transform children’s lives – helping children to understand who they are and where they come from, to overcome trauma and build self-esteem, and to release potential. Sport and art are unrivalled in their ability to engage children on a level playing field, where they can express their hopes and dreams and explore their identity safely. At ABC Trust we link vital community projects using sport and art in Brazil with people who share our vision at home and in Britain. So we’re delighted to be able to not only celebrate the transformational power of sport and art through this unique initiative, but also bring together the best of Brazil and Britain during the World Cup."

Artists Rob and Nick Carter said of the project: "Pele, a true magician with the football, was regarded by many as the best player of all time. He has safely guaranteed a giant's reputation in perpetuity. It seemed very logical to us to design an optical illusion box underscoring that sense of eternity using spy glass and surface mirrors to house the fantastic signed football. ABC Trust is a wonderfully worthwhile charity and we’re delighted to be involved." 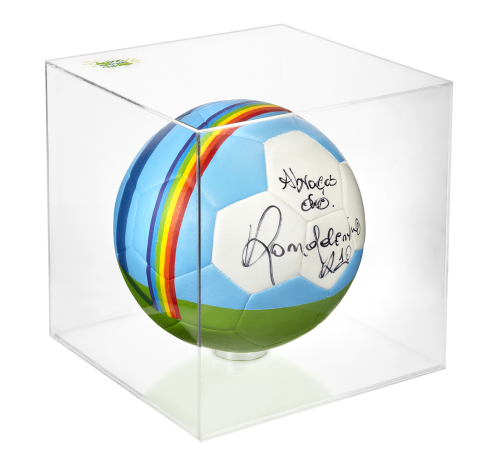 Singer, composer and multi-disciplinary performance artist Cibelle is from São Paolo and has represented her country at the São Paulo Biennial. She commented: “I hope for the days when people all over the world will use the same passion they have for football, to channel it for change, for equality, for helping those in need. May these footballs become a symbol of cocreation.

It’s a simple act, one player signs, and an artist puts their materials onto it in an act of co-creation, both apply their art onto the same object and charge it with intent. I take the players intent on winning the game placed on the ball at play, and add charge to it with intent for love winning over hate, with equality being championed all over the world. It will win. It must.”

Artist Richie Culver commented: It was an easy choice saying yes to this, from an Artistic point of view it was a good challenge working on a football, from a personal point of view as a massive Football fan to collaborate with Neymar Jr also is great. Lastly and most importantly was the charity aspect: ABC Trust. Hopefully we can raise some good money to help the more vulnerable kids from Brazil to ensure they get a fair chance in life.