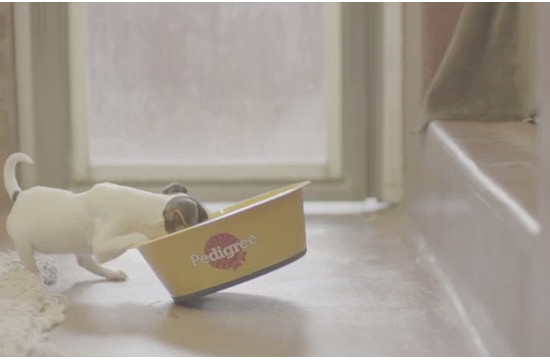 On 18th September Pedigree is launching a new advert urging consumers to help feed one millions meals to dogs in re-homing centres across the UK by buying special packs of Pedigree bearing the pledge 'Buy One Feed One' on sale in stores across the country. The latest advert is part of the wider Feeding Brighter Futures campaign, which launched earlier this year in May with an advert that showed the vital role that food can play in helping rescue dogs on their road to recovery and in finding their forever home.

The advert will run for a period of four weeks and captures the excitement felt by dogs just before meal times. It aims to highlight the vital role that nutrition plays in the recovery of rescue dogs, and will be first shown during Coronation Street this evening.

The new advert forms part of a fully-integrated though the line campaign featuring print and online advertising, PR and in-store promotions. As part of the activity, campaign ambassador Paul O' Grady and will join with dog lover Amanda Holden, to lead a national plea calling on animal lovers across the country to join with Pedigree in feeding dogs in rescue shelters.

The Feeding Brighter Futures campaign was launched earlier this year and coincided with the announcement of Pedigree's sponsorship of the  award winning ITV show Paul O'Grady: For The Love Of Dogs, which aired in May, and saw Paul help to rehome dogs at The Battersea Dogs & Cats Home.