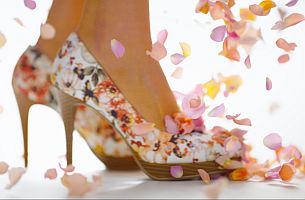 Payless ShoeSource, the largest footwear retailer in the Western Hemisphere, has long been seen as the value leader in family footwear. Now, in its new campaign from Agency of Record MARC USA, the brand stakes its claim as a style leader with a carefully curated collection of the most on-trend styles for every season. The campaign also launches the brand’s new tagline, Payless for Style.'

The new campaign features a series of six to eight 15-second TV spots appearing throughout the year, each highlighting the hottest looks of the moment.

The campaign launched with the best looks in athletic footwear to pair with the athleisure wear many women are literally living in.

Next up are spring pastels and florals in a spot breaking in early March, just in time for the key Easter fashion season.

Vincent DeSantis, Payless ShoeSource SVP/CMO, explains that while women have many choices of where to shop for shoes, Payless customers pride themselves on finding great style and great value. “With the great improvements we’ve made in our products, there’s more style than ever across the entire Payless line. That’s the message of this new campaign – both for women who may not have thought about Payless recently as well as to our loyal Payless shoppers.  We want them all to know that at Payless, they will always be on-trend with the latest styles at the unbeatable Payless price.”

Cari Bucci, General Manager of MARC USA Chicago, adds that new TV spots are built around the specific trend that’s hot for the season. “The shoes are clearly the focus in these fun spots with the high-energy music and graphics echoing the style trend. Our goal is to surprise and delight women with all that Payless offers.”

The media strategy is built on national broadcast and cable networks, primarily in prime time popular culture programming targeted to women.  The Payless style point of view is communicated across consumer touchpoints including digital advertising and point of purchase.  (Payless ShoeSource’s annual marketing budget is $90 million.)