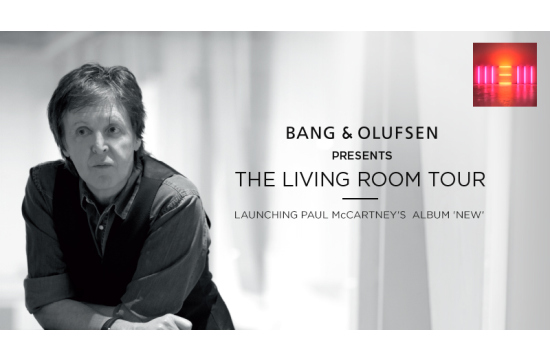 Today BBH and Bang & Olufsen will present Paul McCartney in conversation about his NEW album, which was released yesterday.  NEW is Paul's first album of brand new recording material since 2007.  McCartney's NEW album sees him working with producers Mark Ronson, Ethan Johns, Paul Epworth and Giles Martin for the first time ever.  ‘The Living Room Tour’ will provide an opportunity for people from across the world to put their questions to Paul about writing the album, working with new producers and the recording process.

The brief for the project was to re-launch and re-position Bang & Olufsen by reasserting the brand’s unparalleled sound credentials.

The new brand idea, ‘Great sound deserves Bang & Olufsen’, is rooted in the truth that sound is an important, emotional communicator. In a category where many are willing to compromise on quality, the campaign establishes the superiority of Bang & Olufsen by communicating that better quality leads to a heightened experience.

‘The Living Room Tour’ is the first iteration of Bang & Olufsen’s new brand positioning. The campaign, created by BBH London, is an on-going project where Bang & Olufsen brings the audience one step closer to the music and artists they love. The idea is built around a shared passion for great sound and the belief that great music deserves to be heard as the artist intended, which is only possible with the highest quality speakers.

The first live event, launching on 15 October at 2pm UK time, will see Paul McCartney in conversation about the inspiration and influences behind his new album. The event will be streamed at bang-olufsen.com/mccartney and users can tweet #askmccartney for the chance to have their questions answered by McCartney himself.

The event is being supported with PR, online advertising and an online content platform, created by BBH and built by Wunderman Copenhagen, which will house an edited version of the interview along with additional behind the scenes footage relating to Paul McCartney’s NEW album and an exciting product launch, soon to be revealed by the brand.

The event will be streamed here:  bang-olufsen.com/mccartney