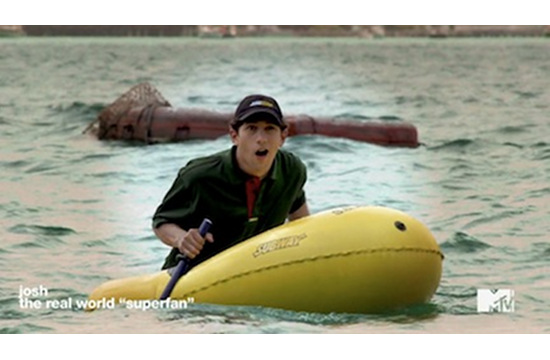 Faced with a challenging production set on location in St. Thomas, MTV turned to the production/post hybrid studio Cinema Five Films to execute its new two-spot integrated marketing campaign for Subway and MTV’s ‘The Real World’.
“There was some concern initially over the expense and logistics of shooting in St. Thomas so we tried to find an approach that would keep the production in New York, but tie it into ‘The Real World St Thomas,’” Patrick Donnelly, Director/DP of the campaign, and founder of Cinema Five Films, says. “In the end, we went with the idea of the ‘super fan’ and figured out a way to shoot in St. Thomas with a small crew and minimal of gear.”
The comedic spots – ‘Scuba’ and ‘Special Delivery’ (below) – both follow a similar set up in which Josh, The Real World super fan, happens upon the empty Real World house, comes in and makes himself at home in a big way, including munching on an array of Subway sandwiches intended for the show’s cast. The spots end with a clip from the most recent Real World episode and a tasty product shot of Subway’s ‘avocado season’ line of subs.
While Donnelly notes that it the production was helped by the fact that they shot at the actual Real World house, which is already lit for broadcast, what made this project manageable budget and schedule-wise was the hybrid boutique structure of Cinema Five Films, which combines production and post under one roof. Cinema Five Films also features editor Mark Breese, who cut the campaign; and director Tim Pumphrey.
“Our business model really helped get this done,” Donnelly adds. “With Mark involved from the beginning, we had a clear idea of where we were heading creatively, and because it’s all happening under the Cinema Five Films roof we can keep costs where they need to be.”