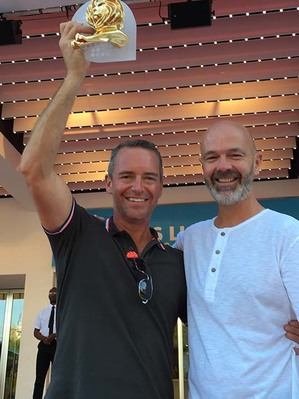 Speaking of the move from New York, Rob Reilly, Global Creative Chairman at McCann Worldgroup said: "In my three years at McCann, I've loved seeing the steady stream of world-class work coming out of Australia. It's because I have a world-class creative boss there: Pat. I trust Pat to always do the right thing. And that is what I value most. McCann Australia's success is due in a huge part to his hard work and dedication to making McCann a special place."

Also from New York, Mescall added: "This is great news for McCann. Pat is one of our very best: an intuitive, intelligent and exceptionally passionate creative leader who genuinely and deeply cares about the quality of the work and just as importantly, the success of our clients. Having been lucky enough to have worked closely with Pat for several years, I know McCann Australia's creative fortunes are in great hands. Well done, Pat."

Since Baron's return to McCann Melbourne in 2012, McCann has made Australian history as the world's most awarded agency in the The Gunn Report, Won Report and AdAgeAwards Report, for campaigns including V/Line Guilt Trips, the Australian Government's Impossible Orchestra and Dumb Ways to Die. The most awarded campaign in history, Dumb Ways to Die featured in both the AdAge Top 15 Ad Campaigns and Gunn Report 20 Best Commercials of the 21st Century. Baron's Lion-winning work has since included campaigns for Tigerair, Melbourne International Film Festival and even the creation a new English word - "Phubbing" - for Macquarie Dictionary. During his tenure, McCann Melbourne has also been named Agency of The Year by Campaign Brief, D&AD, London International, Spikes Asia, Campaign Asia and AWARD. And top Australian agency in the World Advertising Research Centre, APAC Effies, Asian Marketing Effectiveness & Strategy and Australian Creative Effectiveness Awards.

Talking exclusively to CB, McCann's Ben Lilley - pictured above left with Baron at the 2016 Cannes Lions - said: "Pat's creative record speaks for itself. In his new role, he'll help ensure the ongoing excellence and effectiveness of our creative product nationally across each McCann Worldgroup Australia entity. Today this includes McCann, McCann Health, SMART, MRM and The Red Republic, headed by a brilliant team of creative leaders including Matt Lawson in Melbourne, Jerker Fagerstrom and June Laffey in Sydney and Ben Davis in Queensland, so I couldn't be more excited by our national creative line-up. In my regional role as McCann Worldgroup APAC Creative Leadership Chair, Pat has also been a great support and will continue to help us craft and elevate our creative product across the Asia Pacific region."

Baron added: "Ben, Rob, John and [McCann Worldgroup Asia Pacific President] Charles [Cadell] have all been incredibly supportive and I'm thrilled to be part of their creative vision for the future. I've been fortunate enough to work with the dynamic-duo of Adrian Mills and Matt Lawson in Melbourne. Now having admired Jerker, Ben D, June and their teams for a long time, it's an honour to work with them during this exciting time of growth at McCann."

"Pat and I first worked together just on 20 years ago as a writer/art-director team, at McCann Melbourne no less," Lilley added. "We produced some great work as a creative team then. And have now enjoyed another 5 great years as a leadership team since we each returned to McCann. Over this time, we've seen both the Melbourne office and our national network double in size and collect countless creative accolades. This is due in no small part to Pat's creative output, which has seen him awarded at every major international award show over the past 5 years. I couldn't be more pleased for Pat."

In 2014 Baron was named ANZ Creative Of The Year Australia by Campaign Asia Pacific. And in 2015 he was the first ever recipient of the Creative Of The Year award at the Australian Creative & Effectiveness Awards. In 2016 Baron ranked as one of Gunn's top 50 CCO's in the world. He has also actively supported the industry on award juries for CANNES (Film), the ONE SHOW (Film) the New York Festivals (Film), SPIKES Asia (Film, Print, Outdoor, Radio and Print Craft), AWARD (Promotion and Experiential, PR and Media), Sirens, is an AWARD School judge and an Australian Creative & Effectiveness Awards ADMA AC&E jury president.

Under Reilly, McCann globally has seen a creative resurgence, ranking as the Gunn Report's second most awarded creative network in the world in 2016. This was the second straight year in which McCann's global Gunn ranking jumped significantly, with the network rising from No. 9 in 2014 to No. 5 worldwide in 2015. McCann's move up the Gunn rankings followed its similar rise to the number 2 position in Ad Age's 2017 Agency A-List. The Gunn Report also saw McCann retain its global position as the number 2 most awarded network in digital creativity, with McCann New York's "Field Trip to Mars" virtual reality campaign for Lockheed Martin registering as the third most awarded individual digital campaign in the world. Additionally, McCann London's live event "Survival Billboard" for Microsoft Xbox's Tomb Raider video game was recognized as 2016's single "most awarded print/ out of home" campaign in the world. The Xbox and Lockheed Martin creative work both scored among the Top 10 campaigns overall, and four McCann Worldgroup agencies were ranked in the Top 50.

McCann's creative recognition throughout 2016 included having the single-most awarded campaign at the Cannes Lions Festival, with both the McCann U.S. and U.K. agencies ranking No. 1 in their respective countries; being named "Network of the Year" globally at the London International Awards, Cresta, and Midas financial marketing awards; in Europe at the Golden Drum Awards; in Latin America at the three FIAP, El Ojo and El Sol regional awards; FP7 Dubai// McCann's recognition by the EFFIEs as the No. 1 most effective agency in the world; McCann Health's being named "Network of the Year" both at the 2016 Cannes Lions Health Festival and at the Global Awards; and Momentum and Weber Shandwick also receiving agency of the year donors. Last week, the agency again made global headlines on International Women's Day, when it installed a bronze statue of a defiant "Fearless Girl" for State Street Global Advisors in front of Wall Street's iconic charging-bull statue.
view more - Hires, Wins & Business