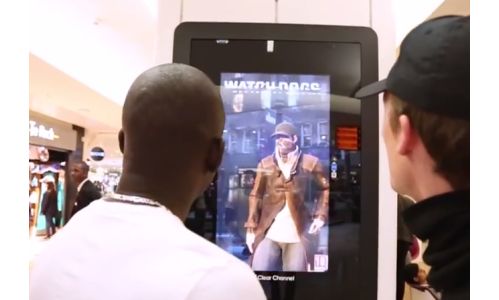 Sony Computer Entertainment France and Ubisoft Sony joined forces for the launch of the video game ‘Watch Dogs’ on PlayStation 4 to create a Digital Out Of Home campaign. In association with Mindshare and Clear Channel France, the Biborg agency developed a creation which invites the users "to hack" a PlayStation 4 ad with their smartphone.

The video game ‘Watch Dogs’ was released on May 27th and already stands out as one of the games of the year on the various Playstation platforms. Players embody Aiden Pearce, a talented ‘hacker’ whose violence caused the loss of his closest relatives. With his smartphone he can watch and hack everything surrounding him.

Using the close relationship between PlayStation and Ubisoft, Biborg managed to unite both brands for an innovative campaign, realistically illustrating the tagline of the game "Hacking Is Our Weapon".

It’s a simple principle: a PlayStation 4 ad is broadcasted all day and in exclusivity on a Clear Channel totem and by scanning a QR code, the user can take control of it to reveal a Watch Dogs video. Within every "hack" the users can participate in an instant win game to try to win a PlayStation®4, Watch Dogs video games and many other gifts. The campaign is broadcasted from the 30/05 to the 05/06/2014 in the ‘4 Temps’ shopping mall in La Défense (Parisian suburb).

"We are delighted to have been able to associate our two main video game clients around this campaign. We wanted to create a surprising and immersive user experience, directly inspired by the universe of the ‘Watch Dogs’ game and it is a very good example of our strong will to bring interactivity in Digital Out Of Home campaigns.” Said Bruno Luriot, Business Director & Co-Founder – Biborg.