Playing on the themes of identity, and hiding behind an online persona, the video plays out like a surreal and dark metaphor 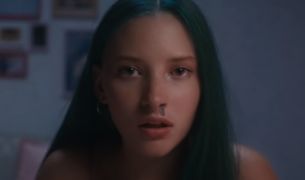 Sophia Ray’s new music video for singer-songwriter Au/Ra plays with the boundary of reality and fantasy. The track explores communication struggles in today's social-media-centric, virtual world, inspiring the concept behind this video.

Playing on the themes of identity, and hiding behind an online persona, the video plays out like a surreal and dark metaphor. As voyeurs, we watch Jamie in what at first appears to be an ordinary teenage girls bedroom, doing the things that ordinary teenage girls do. However as the video progresses, her world begins to 'malfunction', unravelling as both the viewers and Jamie begin to peel away the layers of this synthetic world to find something even more synthetic lurking underneath.

Sophia said of the promo: ‘I really enjoyed the creative process behind this video, taking inspiration from modern sci-fi cinema greats like Alex Garland, as well as collaborating with Jamie on really crafting the pacing of the story and honing in on her performance style. I also enjoyed playing with subliminal nods to the end of the video, through stylistic choices in the art direction of the set - creating a feeling of unease from the start, that viewers might even only subliminally take in before the final twist is revealed at the end of the video’.