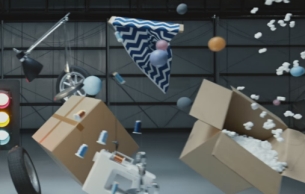 Park Pictures directing duo Terri Timely takes an architectural look at the world of the vast IBM Cloud in the new 60 second 'Designed for Data' for IBM, out of Ogilvy NY. The spot utilises Terri Timely’s signature clever visual composition to snapshot the limitless array of data that can be stored in the IBM Cloud.

Within a continuous shot panning out, we see a sleek warehouse with a meticulously constructed lineup of vignettes building upon one another, magnifying the depth and variety of businesses’ usage of the cloud. The campaign also includes three additional 30 second spots that highlight real customers, including “Built for Transformation,” “Ready for New Business Models,” and “Spotlight on Dark Data.”