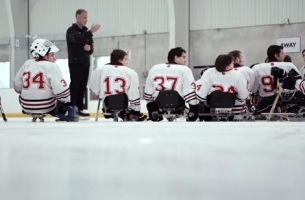 Gatorade’s ethos of WIN FROM WITHIN applies to all athletes, professional, amateur, recreational, and in the case of Canada, no more so than in its national sport, hockey.

With this in mind, nobody exemplifies WIN FROM WITHIN like sledge hockey athletes.

Thanks to a partnership with the NHL, NHLPA and Hockey Canada, TBWA had access to a number of NHL players, more importantly brand representative Sidney Crosby. This year TBWA\Toronto wanted to do something more with this relationship and these incredible athletes, to get them involved in the community with athletes of ALL types.

And with this, the Gatorade Sledge Hockey Surprise was born.

On August 18th, 2014, TBWA invited the sledge hockey team, The Cruisers, many of them Paralympic athletes who performed at Sochi that year, to be filmed for a Gatorade documentary about the incredible athleticism and skill exhibited in their sport.

What they didn’t know is that a group of NHL Players were invited to play a surprise game of sledge hockey with them. The players are some of the NHL’s best: Sidney Crosby, Scott Hartnell, Claude Giroux, Logan Couture, Ryan Miller, Nathan MacKinnon, all put their rivalries aside to give these sledge athletes the game of a lifetime.