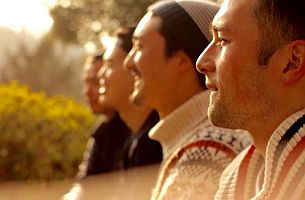 'Apotheke - the bridge band' is the story of activists - contemporary Ninja warriors. They use disco music as their weapon. Their creative talents flourish in an enclosed commune far from the city hustle and bustle. For years, they have persistently "bridged" the gap between minorities and a very traditional Japanese society.

The film tells the story of very brave men in the far corner of Japan, who found their place... and a way to fight intolerance.

After loud and crowded Tokyo, absolute silence struck," recalls director Piotr Onopa of his adventure in Japan. "We’ve wound up at an artistic village where the musicians of Apotheke live. The band openly fights for minority rights, which is a sign of extreme bravery and rebellion in hierchic and traditional Japan."

The film will be premiering worldwide on facebook.com/papayafilms at 4pm today.

Papayafilms' Snapchat will also give an exclusive look into the directors’ day.