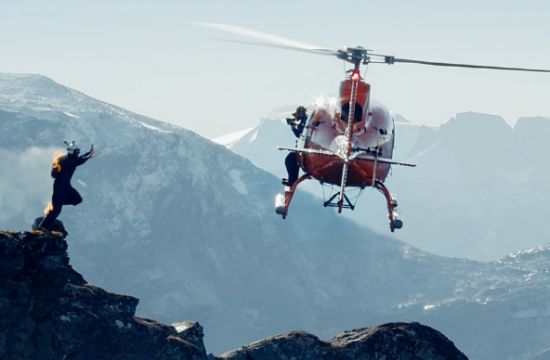 Norwegian underwear producer Devold put their protective clothing to the test as they set fire to a base jumper and sends him over a cliff 1200 meters above ground.

The scene is set with stunning imagery from the rough mountain landscape near Helsetkopen Norway. The music illustrates the tension and excitement before Tom Erik Heiman is about to perform one of the most spectacular base jumps ever performed.

“The thing that concerns me the most is my pilot-chute (that opens the parachute). If the  pilot-chute gets burned it might not work”, says stuntman Tom Erik Heiman before he is about to jump off a 1200-meter high cliff indulged in flames.

Adding flames to an activity that is already associated with high risk in the first place, doesn’t this sound reckless and unnecessary? According to Devold, it is precisely those situations where life and health is at risk where their products can make a difference.

“In this movie, we wanted to demonstrate that Devold Protection products withstand the  most demanding challenges. We put our products in an extreme situation where they had to function optimally”, says Trond Sleipnes, Marketing Director in Devold of Norway AS.

Devold is a Norwegian manufacturer of protective underwear that protects against cold,  heat, flames, static electricity and metal splash. The company was the first manufacturer to receive EU-approval for their flame retardant underwear.

“Through The Devold Protection Challenge, we wanted to focus on these situations. We wanted to test the products and its capabilities in a setting where there are no room for mistakes, where the stress level is high, and the focus must be entirely on the task”, says Trond Sleipnes.