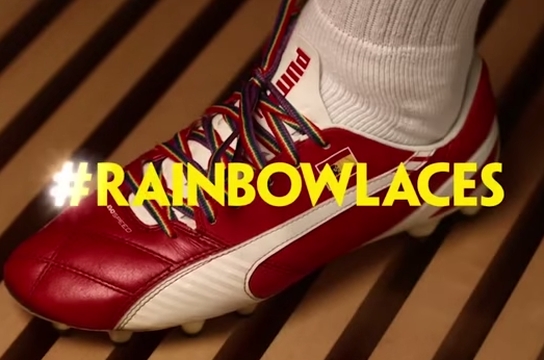 With backing from the Premier League and high-profile support from Thomas Hitzlsperger, FA Cup winners Arsenal and champions Man City - Paddy Power, Stonewall and the Gay Football Supporters’ Network have again teamed up to help tackle one of the toughest challenges in sport: homophobia in football.

Building on the success of last year’s inaugural campaign in which hundreds of pros laced up including Leighton Baines, Olivier Giroud and Joey Barton, alongside widespread support from politicians, pop-stars and actors including Ed Balls, Stephen Fry and Gary Lineker, players and fans are being urged to again show their support over the 13th/ 14th September – Rainbow Lace weekend.

Grand Central’s Munzie Thind created the sound design on the spot: "I’m very proud to have been involved in this project. The sound design was in itself very simple, a few layers of atmos to create a subtle changing room environment, just to add some simple depth. The main attraction of this spot comes from the humorous self-deprecation dialogue of the footballers. It was important that this was crisp & clear and easily audible. I did not want to distract from that but rather enhance it, so that the message does not get lost. The end goal, after all, is to encourage fans to participate, get the laces, lace up and to show their support for a good cause and cheer for equality"

Arsenal stars Theo Walcott, Alex Oxlade-Chamberlain, Olivier Giroud, Santi Cazorla and club captain Mikel Arteta will kick-off the campaign with a high-profile TV ad - ‘The Changing Room’ - designed to raise awareness of the issues around homophobia in football and lead the charge in changing the beautiful game.

Arsenal Captain, Mikel Arteta said: “We’re very happy to support the campaign and whilst the advert is a light-hearted look at the things we can’t change, discrimination in football cannot be tolerated and we need to work together to change this.”

Among the 5000 professional footballers in the UK, not one of them is openly gay – a scenario that’s over a quadragintillion to one. Research from Stonewall shows seven in ten football fans have heard or witnessed homophobia on the terraces and more than 40% believe football to be an anti-gay sport.

In a bid to help tackle these facts, rainbow coloured boot laces have been dispatched to every single professional player in the UK, including youth and women’s teams, alongside deliveries to all MPs and leading political figures. Fans and grass-root players will be asked to tweet their support using the official hashtag: #rainbowlaces. 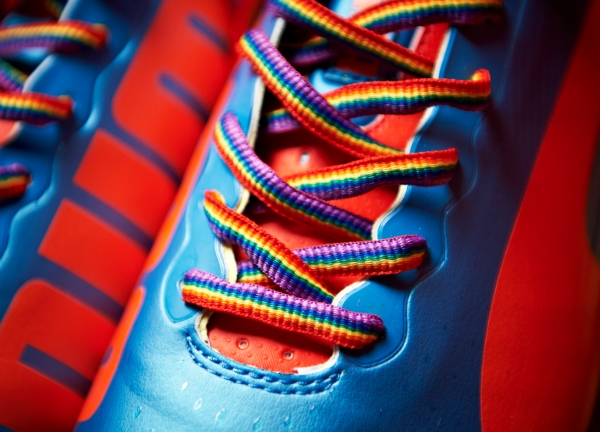 Ruth Hunt, Chief Executive of Stonewall, said: “Last year’s Rainbow Laces was a great start but there’s still a long way to go to tackle homophobia both on and off the pitch. The clubs and players supporting the campaign and lacing up this weekend are taking a powerful stand against homophobia in our national game.”

Premier League Director of Policy Bill Bush said: “The Premier League welcomes initiatives like Stonewall’s Rainbow Laces campaign that share our objectives of equality throughout the sport. Unfortunately discrimination still exists in society and we recognise football’s leadership role in educating participants at all levels that any form of discriminatory behaviour is not acceptable.”

Thomas Hitzlsperger, the only openly gay player to have played in the Premier League, said: “I’m proud to be working with Stonewall on the Rainbow Lace campaign. I want to show that being gay and a professional footballer is something that’s normal. The perceived contradiction between playing football, the man’s game, and being homosexual is nonsense." 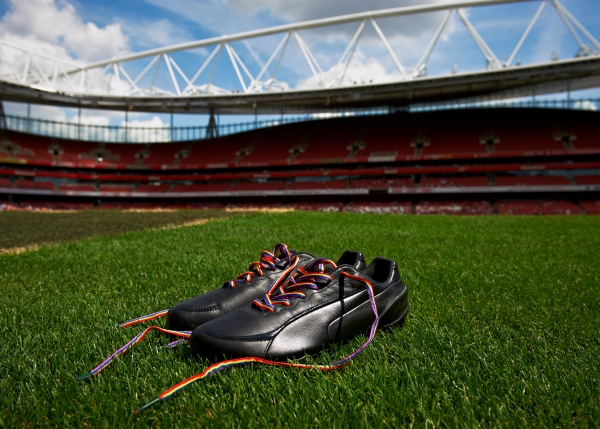 Paddy Power said: “We love football but it needs a good kick up the ass. In most other areas of life, people can be open about their sexuality and it’s time for football to take a stand and show players it doesn’t matter what team they play for. Fans can show their support by simply tweeting using #rainbowlaces, whilst all players have to do is lace up over the weekend of 13th + 14th September.”

Ed Connell, Gay Football Supporters’ Network Chair said: “Last year’s Rainbow Laces campaign successfully highlighted the problem of homophobia, biphobia and transphobia in football in a bold and impactful way, grabbing the attention of the footballing world. However real progress is never achieved with one off campaigns. That’s why the Gay Football Supporters’ Network (GFSN) has welcomed the opportunity to work on this year’s campaign which we believe can bring about real CHANGE in the game. With partnerships like this with Paddy Power and Stonewall, we take one step closer to our goal of football for all.”

In a nod to the ambition of the campaign the Metro are dedicating an entire editing to Rainbow Laces on Monday 8th September. The paper will carry a bespoke rainbow coloured masthead and all display ads in the edition will either have bespoke copy or reference the Rainbow Lace campaign. Not only will this be a first for the paper, but a first for the industry. Many of the UK’s best known brands are supporting the campaign, both in the Metro and socially, including Premier Inn, who will rename themselves ‘Premier Out’ in all communications for the day, Smirnoff who are producing a limited edition Rainbow Lace bottle, Facebook, Heineken, Sky, Estee Lauder, LastMinute.com, TFL, KLM, Nissan, Virgin Media, TalkTalk, British Gas, Lidl, Aer Lingus, Game, AIG, Halifax, Premier Inn, Starbucks and the Pride movie.

And it’s not just footballers lacing up, with Premiership Rugby having joined the campaign. Paul Morgan, Premiership Rugby Communications Director said: “Rugby union will not tolerate discrimination of any kind and we are therefore delighted to support Stonewall’s Rainbow Laces campaign. Rugby, and the professional game, have a great track record of supporting members of the LGBT community and our clubs strive to be welcoming environments for players, officials, volunteers, staff and fans, no matter what their sexual orientation or gender identity.”