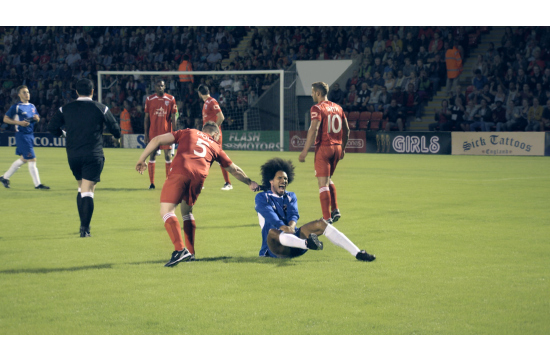 Last season the ridiculousness of the Premier League reached new levels with ball boy booting, arm biting, and a Geordie punching a horse. The question is whatever next for the competition watched by over half the world?

Bookmaker Paddy Power think they have the answer and it’s a shocker. Players have used just about every part of their anatomies to put their stamp on the beautiful game so the natural next step is to accessorise. A new video from Paddy Power looks at what could happen if football was given a power up – by arming players with Tasers.

The electrifying results of this future gazing from agency CP+B London are showcased in a 40 second clip launched on YouTube ahead of the return of the Premier League this weekend. The clip includes opposition players being given something to really roll around on the floor for, referee’s getting jolted for shocking decisions, and football club staff being given the good news with 50,000 volts – the video even has a very special appearance from QPR midfielder Joey Barton dishing out his very own Taser treatment.

The content is part of Paddy Power’s ‘Ball of Shame’ football campaign - a season long effort to look after hard done by fans who find themselves at the receiving end of the mad and bad behaviour in top flight football. To coincide with video launch the bookmaker has looked at the real life moments that inspired ‘Taser’ by creating the top 10 Ball of Shame moments and immortalising them in 8bit format.

The top 10, released through Paddy Power’s twitter feed, included Vinnie Jones grabbing Gazza’s knackers, Eric Cantona showing off his Kung-Fu skills to a Crystal Palace fan, and Frank Lampard being denied a goal against Germany that was more obvious than the fact Qatar is a bit hot for football in the summer months.

The bookmaker has also priced up a series of odds on what actually might happen next in rollercoaster that is the Premier League. They give odds of 9/2 for Delia Smith to give a half time pep talk to the Norwich crowd, 33/1 for Moyes to be the next manager to get the axe and 100/1 for Fulham to put up a statue of Justin Bieber outside Craven Cottage.

A Paddy Power spokesman said; “After seeing teeth bared and boots buried into ball boys last season, we had to think long and hard about what an earth was next for the beautiful game. Tasering seemed like the natural next step for our inventive bad boys and our video gives a glimpse of some next level Ball of Shame. Please note that no egos were hurt in the making of this film.”