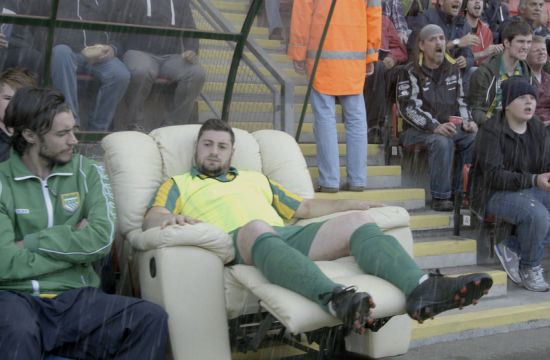 The number one gripe of the average sports fan is being addressed by Paddy Power in their new advert as they take on the ultimate foe; the lazy, out of shape, and yet very well paid footballer.

The new advert, launching during the Arsenal versus Tottenham FA Cup clash on ITV this Saturday, shines the ‘Ball of Shame’ spotlight on the type of footballers regularly cursed in post-match debates across the country. Whether it’s the guy who can’t get in his kit or the one who spends more time sitting down than the Made in Chelsea cast, they all deserve a new year’s kick up the behind.

However, these lethargic millionaires still pick up their pay cheques each week and Paddy Power think it’s about time the fans got some pay back for funding their regimes of fast food and sleeping. To go along with the launch of their new ad the bookmaker have created a decathlon of laziness and will be releasing stats from the first half of the Premier League season that name and shame those who provide least bang for substantial buck.

Each day throughout early January Paddy Power will, through their blog and social channels, unveil the winners of categories such as The Keeping a Low Profile award (least shots), Knocking Off Early gong (least time on pitch from starting), and the Sitting Pretty honour (most time spent warming the bench). After the contenders in the ten categories have been decided the laziest players in the league will be announced and the fans of the unlucky club who employs the shameful overall winner will receive a reward from the bookmaker.

The advert is the latest part of Paddy Power’s ‘Ball of Shame’ football campaign - a season long effort to look after hard done by fans who find themselves at the receiving end of the mad and bad behaviour in top flight football.

A Paddy Power spokesman said; “You’d expect players from the biggest league in the world to be fit, hardworking, and professional but picking up fifty grand a week doesn’t seem to be enough motivation for some! Our new ad pokes fun at the guys who seem more bothered about the canteen lunch menu than they do their club’s league position.”