Birds behind Bars: BBH London launches spot to celebrate the release of Season 3 of Orange Is The New Black 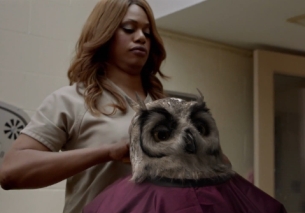 In 2014, Netflix announced Virgin Media to be their preferred streaming provider. To celebrate the release of Season 3 of Orange Is The New Black, Netflix offered Virgin Media the opportunity to be one of the first UK brands to create exclusive branded content starring its famous characters.

The resulting campaign aims to appeal to fans of the show with a piece of content that suspends their belief, putting Virgin Media’s creative platform at the center of this blockbuster Netflix original series for just one minute.

'Birds Behind Bars’, is a “gritty” expose that delves into the realities of prison life. The film follows new inmate Ally McNab, the owl from Virgin Media’s advertising campaigns, and the thrilling story of her time spent in Litchfield Federal Prison with its famous inmates.

The film uses a combination of new and existing footage and was produced, directed and edited by Black Sheep Studios, BBH London’s in-house production unit which launched at the start of this year.

The campaign is running online, on social media, in retail, and on video on demand.

Jeremy Ettinghausen, Innovation Director at BBH and BBH Labs said: “It’s a piece of content involving an entertainment property, a subscription streaming service and a broadband provider. It stars characters from a TV show interacting with characters from an advertising campaign, in an advertising campaign for a TV show, a broadband provider and a subscription entertainment service. Is this a new content type? We don’t know. Is it interesting? We think so, maybe simply because we can’t put it in a box.”