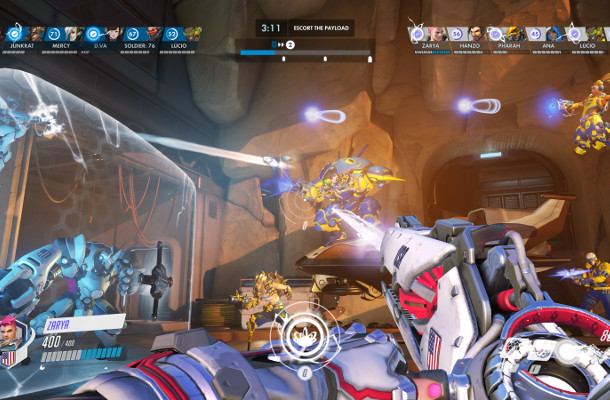 The first few weeks of regular-season Overwatch League play have been defined by budding rivalries and down-to-the-wire matches between the 12 teams of the first global professional city-based esports league. More than 10 million viewers worldwide tuned in during opening week, and the league announced its debut automotive partner, Toyota. Now, two new partners have signed on to support the Overwatch League in its inaugural season: the wireless provider T-Mobile and Sour Patch Kids candy.
T-Mobile has signed a multi-year agreement to become the official wireless provider of the Overwatch League in the United States. As a part of the agreement, the Un-carrier will be the exclusive title sponsor of the Overwatch League Regular Season MVP and Finals MVP awards. Throughout the season, T-Mobile will give its customers and esports fans alike more of the sport they love, with exclusive perks, an insider’s look at the top MVP candidates, and more.
“The same way T-Mobile re-wrote the rules of wireless, the Overwatch League is doing for esports, so this partnership is a natural fit for us,” said Meredith Starkey, VP of events and sponsorships at T-Mobile. “We’re excited to bring the Un-carrier customer-first experience to esports fans by giving them a voice in voting to select the T-Mobile MVP award winners throughout the season.”
As a part of its sponsorship with the Overwatch League, Sour Patch Kids brand—the country’s #1-selling sour candy—will bring fans content that will air during the Overwatch League season-one livestream. Fans on-site at Blizzard Arena Los Angeles also will be able to enjoy a branded experience, digital-board messaging, branded thundersticks to cheer on their favorite teams, and of course free Sour Patch Kids candy at select matches.
“The Sour Patch Kids brand is always connecting with our fans where they live and play, which is why we’ve been a part of gaming since 2011,” said Katie Williams, senior director of marketing, North America Confections. “Our sponsorship with the Overwatch League gives us an immersive opportunity to support this exciting evolution in esports and highlight gameplay moments for spectators in the arena and those streaming from home.”
“We couldn’t be happier to add iconic consumer brands like T-Mobile and Sour Patch Kids candy to our growing roster of Overwatch League partners,” said Pete Vlastelica, president and CEO of Blizzard Entertainment’s MLG division. “The exclusive experiences, content, and access that both brands have committed to providing will make the Overwatch League fan and viewer experience that much more rewarding for our global audience.”
The Overwatch League is further supported by Toyota, HP, and Intel, with players competing on cutting-edge gaming hardware including HP’s OMEN gaming PCs, powered by the latest Intel Core i7 processors.
view more - Hires, Wins & Business