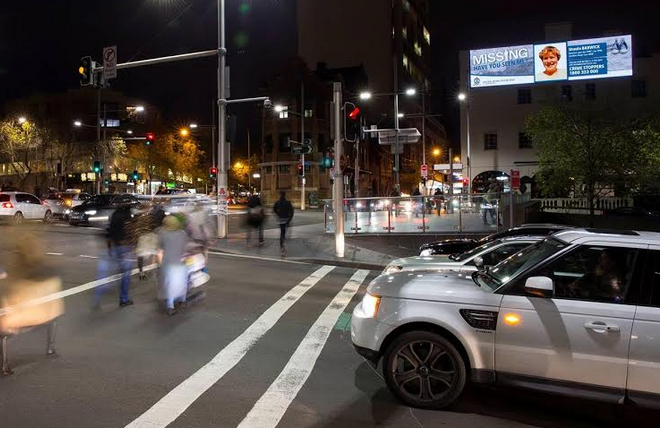 The Outdoor Media Association (OMA) has today announced its Memorandum of Understanding (MoU) with the Australian Federal Police (AFP), which will extend the 2015 National Missing Persons Week (NMPW) campaign to outdoor advertising across Australia.

Running from 2–8 August, NMPW is an annual campaign designed to raise awareness about the issues and impacts associated with missing persons cases, and to profile long-term missing persons.

“The Outdoor industry is now in its seventh year of supporting this vital campaign in New South Wales and expanding our promotion of this national campaign across Australia, in partnership with the AFP, is a natural progression. Our audiences keep growing and our digital reach is increasing—using this unique position to broadcast critical information that could bring solace to people in need is very important to us,” Charmaine Moldrich, CEO of the OMA said.

The partnership will see OMA members across Australia donating advertising space and production costs to provide national coverage of the campaign on both static and digital inventory, including billboards, taxi backs, bus shelters and the like.

The OMA was inspired by its sister organisation in the USA, the Outdoor Advertising Association of America (OAAA), which runs the National Digital Billboard Initiative through its AMBER Alerts, and effectively reaches the public with information about fugitives, missing persons, and public safety issues. The use of digital inventory in the 2015 NMPW campaign is particularly exciting, given the capacity to instantly update messaging.

"Since 2008, more than 1,000 AMBER Alerts have been transmitted to digital billboards in the US via the National Centre for Missing & Exploited Children," said Nancy Fletcher, President and CEO of the OAAA.

"In the US, the AMBER Alert system started in 1996 as a broadcast system, in response to the abduction of nine-year-old Amber Hagerman in Texas. Since then, this alert system has expanded to other media—including Out-of-Home—to connect with a mobile society on the go. Likewise, law enforcement in the US— including the FBI—relies on Out-of-Home formats to enlist the public's help in finding fugitives, stolen property, and victims of crime. The FBI considers digital billboards 'a force multiplier'.”

While Australia is some way off establishing a digital network of signage, the US is a great example of what can be achieved here.

AFP National Manager Crime Operations Shane Connelly said the newly formed partnership in support of NMPW, along with other crime-related prevention campaigns, would greatly benefit the Australian community through the increased avenues of awareness provided.

“The partnership provides a level of exposure we wouldn’t be able to pursue without the support of OMA, not only in support of our campaign, but most importantly, in support of the State and Territory police who work tirelessly to solve missing person’s cases every day,” Assistant Commissioner Connelly said.

“We are very appreciative of OMA’s, and its member organisations’, support. There is no doubt we’ll reach more people through this outdoor advertising, which will mean more chances of someone recognising and providing information about a missing person to police.”

A staggering 35,000+ people are reported missing each year in Australia. While 95 per cent of people are found within a short period of time, there remains approximately 1,600 long-term missing persons. This is an issue that has the potential to affect anyone, irrespective of age, gender, sexuality, culture, profession or educational background.

“We hope the campaign will assist in finding these people, and, importantly, raise awareness for all missing person cases,” said Moldrich.