Organic Valley Looks to Save More Bros With the 'Brononymous Hotline' 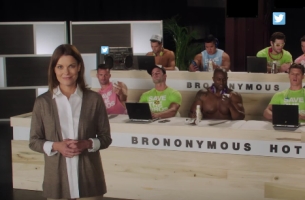 In a follow-up to its hit “Save the Bros” campaign earlier this year, Organic Valley is launching a sequel with new work from creative agency Humanaut. The integrated social campaign seeks to educate consumers about the benefits of the company's Organic Fuel milk protein shake with the "Brononymous Hotline,” an anonymous Twitter outreach program aimed at encouraging bros to switch to a delicious, simple and healthy protein drink made with organic milk.

"We’ve helped save millions of bros, allowing them to continue making meaningful contributions to society, such as fist bumps, flexing selfies and sleeveless fashions," Organic Valley’s spokeswoman says in a long-form video that will be shown on social sites, such as Facebook, Twitter and YouTube. The mood soon turns grim as the setting switches to a gym where bros chug generic drinks, unaware of the healthier, organic alternative. “But Bros are sensitive about their protein, and talking to them about it can be a very awkward conversation,” the spokeswoman says. Cue: the Brononymous Hotline.

She explains that millions of bros still don’t realize the potential dangers of chugging protein shakes made with scary chemicals and artificial ingredients. Organic Fuel is the first-ever organic milk protein shake. With 26 grams of protein, 70 percent of the recommended daily intake of calcium and no artificial sweeteners, it’s an ideal combination of protein and carbohydrates for powering muscles and aiding in post-workout muscle recovery.

The two and a half minute video directs concerned citizens to SavetheBros.com, where they can address their buddy's brotein problem. Pals can anonymously help a bro by entering his Twitter handle and selecting from a number of reasons why he's worth saving, such as his knack for perfecting the art of hair sculpting or preserving the ancient art of tribal tattoos. There are seven videos in all and each tags with "Please protein responsibly." The Brononymous Hotline will then Tweet at your bro with a personalized video and a coupon to try the 26 grams of organic protein in Organic Fuel. And he’ll have no freaking clue who it came from!

“Everyone knows a bro. And to know a bro is to love a bro,” said Lewis Goldstein, vice president of Brotection at Organic Valley, the cooperative of nearly 1,800 organic farmers. “But too many bros are drinking janky protein shakes that could endanger their awesomeness. The hotline will make it easy to anonymously reach out to the bros in our lives and let them know we care.”

The original “Save the Bros” video, launched earlier this year, celebrated bro culture while cautioning bros about the artificial flavorings, sweeteners, and unpronounceable additives that often lurk inside protein drinks. The video went viral and helped a bunch of organic farmers own the internet. The video received more than 6 million views, created 100 million PR impressions and was voted Adweek's Ad of the Week.