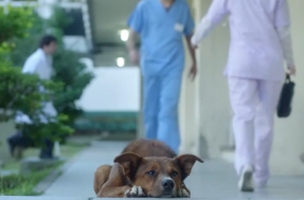 Los Angeles-based Central Films North’s award-winning director Rodrigo Garcia Saiz teams up with DDB Argentina to deliver an affecting story of a loving canine that follows his best friend and sole companion to the end in the new PSA “The Man and the Dog” for FATH (Fundación Argentina de Transplante Hepático). The spot harkens to the story of Japan’s most famous dog, Hachikō, and finds a dog and his elderly owner going about their daily routine, radiating a genuine and lasting bond in their interactions. When the man suddenly has a health crisis, the loyal pup chases the ambulance and meekly awaits the return of his buddy outside the emergency room doors. The dog is innately drawn to a woman being wheeled out of the hospital as it becomes apparent that she now possesses the last essence of his best friend.

No stranger to heavy-hitting PSA work, Garcia Saiz has garnered acclaim for his past spots, including a 2013 Cannes Bronze Lion for the shocking AMIS “Discussion,” a 2011 Cannes Gold Lion win for the memorable AMIS “Office” as well as a 2013 Bronze Lion the provocative anti-bullying PSA “Playground.”