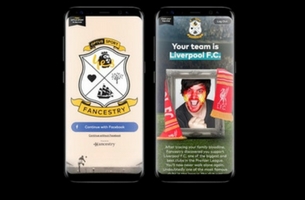 Optus has launched a new digital platform via M&C Saatchi Sydney, where Australian sports fans can discover their English Premier League (EPL) heritage and identify the team they were born to support.

In collaboration with Ancestry Australia, ​Optus has created Fancestry, an interactive site that analyses users' surnames against 20 billion records to identify which team their​ ​ancestors​ ​are​ ​likely​ ​to​ ​have​ ​supported.

Says Corin Dimopoulos, head of television and content, Optus: "Optus Fancestry allows peop​le to learn more about their heritage and gives a new generation of Premier​ ​League​ ​fans​ ​the​ ​opportunity​ ​to​ ​discover​ ​their​ ​EPL​ ​roots.

Says Nigel Seeto, marketing director, Ancestry: "Ancestry helps people gain a new level of understanding about their lives and the story that led to them. Optus Fancestry brings this to life in a fun and relevant way for a new generation of Premier League​ ​fans,​ ​ensuring​ ​they​ ​can​ ​discover​ ​more​ ​about​ ​their​ ​sporting​ ​heritage."

Says Michael Canning, ECD, M&C Saatchi: "Like most Australians I love sport, but in Australia you don't grow up with a Premier League team. By tracing your ancestors back multiple generations you get a perfect reason to follow the team you were born to support this Premier League season".

Says David Jackson, CD, M&C Saatchi: "As a long-time supporter of Leeds United and the days of Harry Kewell and Mark, I was gutted when Fancestry told me my team was Burnley. But since Leeds United are currently running around in the 2nd Division, I finally have a team to cheer for during this Premier League season."

Says Andy Flemming, CD, M&C Saatchi: "Fancestry's one of those ideas that's so wonderfully simple we're amazed that it hasn't been done before. As the only real Pom on the team, I was still intrigued to find out which team my ancestors went for. And no. I shan't be replacing my beloved Brighton with Burnley."

Says Mark Schwarzer, former Australian Soccer Player and Optus Sport Premier League expert:  "Having played in the Premier League, I've witnessed what it's like to be surrounded by such passionate fans and it's an incredible experience. Most Premier League fans have loyally supported their team for generations and this passion shines through to the players. I love that Optus Fancestry is giving Australians the opportunity to discover their team based on their family heritage. They can revive old family traditions and identify the teams they were born to support."

While Fancestry gives the most accurate results to Australians whose ancestors can be traced back to the UK, it has been designed to find a team for everyone. If Fancestry can't find any British ancestors living in the UK at the turn of the 19t​h century, it will determine the user's family name, country of origin and use UK migration​ ​data​ ​to​ ​pinpoint​ ​a​ ​team​ ​their​ ​fellow​ ​countryman​ ​would​ ​have​ ​supported.

Users who discover their team via Fancestry are eligible for a 14-day trial of the live and exclusive Premier League coverage on Optus Sport. Users are also provided with the times and dates their new team will be playing so they can stay up to date on matches​ ​through​ ​Optus​ ​Sport.