One Young World Kicks Off in Johannesburg 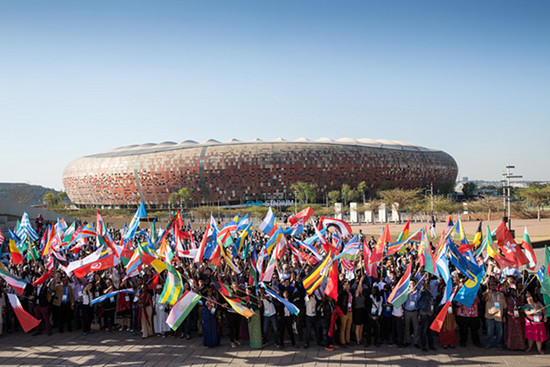 Speaking at the opening ceremony for the One Young World Summit 2013 at Johannesburg’s Soccer City, Annan praised the ability of today’s youth to bring about positive change.

“Together with your One Young World colleagues from across the globe, you embody the talent and energy that is driving change, innovation and creativity around the world,” Annan said.

The ceremony, held at Soccer City, Johannesburg on Wednesday, saw some of the world’s most distinguished leaders address an audience of 9,000 young people, comprising delegates and local school children.

The opening ceremony also featured keynote addresses from Nobel Prize Laureate Muhammad Yunus and Live Aid founder Sir Bob Geldof, both of whom are among the line-up of world leaders serving as One Young World Counsellors for this year’s Summit.

Kofi Annan, former Secretary General of the UN, said: “Wherever I have travelled, it has always been the commitment of young people to peace, equity and justice that has given me hope for the future. And there is good reason for your generation to care so deeply about the fate of our planet.

“Look, for instance, at the challenge of sustainable development. It will be your generation and your children who will pay the price if we continue to plunder our natural resources, pollute the environment and fail to eradicate poverty and hunger.

“It is you who will suffer most from the impact of increasing climate change on living standards and quality of life. And yet, all too often you are shut out from the discussions and decisions that will frame your country’s future and shape your lives.”

Bob Geldof KBE, activist and musician, said: “Personally I believe we are in a very fraught time now, all generations fail, but my generation, disgracefully, has failed more than others.

“Coming together today gives a sense of urgency. We meet here in a new country that has proved what positive action can achieve.

“Last week, in a report that was vaguely noticed, the world's scientists said we may not get to 2030, we need to address the issues of climate change urgently.

“I tell you this, some of the nations that arrived so proudly will not be there to meet us. We must get serious.”

Muhammad Yunus, founder Grameen Bank and Nobel Peace Prize Laureate, said: “What South Africa has done – we can do it for the whole world – nobody ever thought apartheid could be over. But South Africa saved humanity’s dignity.

“You are lucky to have been born in an age where what was impossible is becoming possible. Each one of you is capable of changing the whole world. Feel that power inside of you and make use of it.

The opening ceremony featured stunning performances from the world-famous Soweto Gospel Choir as well as the Sasol Brass Band. As is One Young World tradition, representatives from each of the 190 attending countries paraded their national flags before laying them down on stage as a gesture of unity.

Taking place between Thursday October 3 and Saturday October 5, One Young World Summit 2013 sees 1,300 young leaders from around the world descend on Johannesburg to develop solutions to some of society’s most pressing global issues.

One Young World Cousellors lend their experience, wisdom and support to the young delegates as they work together to develop plans of action. Over the next three days, Counsellors will be hosting key plenary sessions covering topics including sustainable development, human rights, global business, leadership and government, education and youth unemployment.