One Snowman-Mugging, 100 Singing Boxes and a Wealth of Animation 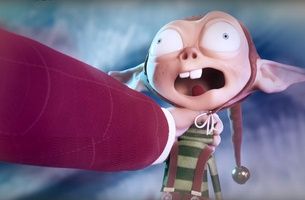 Christmas ads wouldn’t be Christmas ads without some beautifully crafted animation. After all, animation has the power to take us anywhere, so let’s see where we’re headed this week…

We start our Christmas journey in Switzerland. Last year, department store, Manor introduced us to Elfred, a cute / weird / lovable animated elf. This year he’s back with even more of a starring role, trying to fix the fact that an inquisitive boy accidentally snuck a peak behind the scenes at Manor and now wants said elf for Christmas. The story is quite involved but two and a half minutes of charming animation make it whizz by. A beautiful ad from AgainstAllOdds. And a happy ending for our friend Elfred. (Probably so he can come back next year).

Talking of returns, Amazon’s job gets harder every year. Delivering the presents is the easy part. The hard bit is knowing how to make smiling brown boxes the hero of their Christmas ad. Well, this year they’re singing us a song… again. And whilst it’s mostly live action, the animated mouths mean I can just about shoe horn it in here. And shoe horn feels the right word because it ain’t singing to me. Can I feel it? No, sorry, not this year.

My three year old is always telling me 'Sharing is caring' and in this ad about sharing, Buck have definitely cared for every frame. They’ve pulled out all the CGI stops. Unlike recent Apple ads there are no celebrities, no clever sets, just a story that many of us creatives can relate to. The message definitely resonated with me and I think a brand new laptop is just the way to help me share more… hint…

Talking of sharing, here’s someone who’s hell bent on doing the exact opposite. 10 years ago this little brat of a kid had a can of Irn-Bru. He teased The Snowman with it and The Snowman (rightly) nicked it from him, then let him fall from the sky. Harsh but fair. This year, the kid is back to retrieve his probably rather flat can of fizzy pop. But whether you know the history or not it’s a charming ad. The singing could be a little clearer in places and I miss the dumping of the boy in the snow but a lovely alternative for anyone who’s had enough warmth and merrymaking for one year. Insert anything other than a Scottish joke here.