Airing now in partnership with JWT Chicago, the spots ask potential Illinois visitors, “Are you up for amazing?” 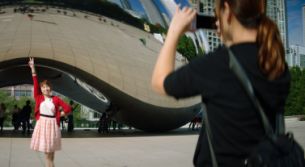 One at Optimus Directors Mark Pallman and Amanda Speva recently teamed with J. Walter Thompson to produce a series of spots for the Illinois Office of Tourism’s new “Are you up for amazing?” campaign. The documentary-style spots – shot at multiple locations across Illinois and featuring both real people and actors – are airing regionally, nationally and internationally now.
“The Illinois Office of Tourism project was a dream job,” said Speva. “We were so excited to helm these spots and represent ourselves as Midwest-born and raised directors. We were able to hire local crew and talent, feature some of the most beautiful locations in the state, while showcasing a few of our favourite Chicago experiences, making this a true passion project.”

Shot over the course of 10 days, the seven spots feature locations in Chicago and around the state, including the Green Mill Tavern, Millennium Park, Navy Pier, Wrigley Field, Galena, Garden of the Gods, Historic Route 66, Springfield and more. They encourage viewers to consider that “The America you expect is somewhere unexpected,” and ask, “When was the last time you did something for the first time?”

“Mark and Amanda were always looking beyond the shooting boards to see what else they could film that was amazing,” said J. Walter Thompson Creative Director Mike Beamer. “They brought that same wide-eyed enthusiasm to the shoot that we were hoping to get from our talent. Their pride in Illinois came through on every day of filming.”

“We had so much fun travelling around the state with Carolyn and Ann from J. Walter Thompson,” said Pallman. “They really trusted us and gave us a ton of flexibility in developing the scenes. We built off their script, and had the liberty to create scenes that would feel real, alive and documentary. Editor Nate Cali was an amazing collaborator, devouring the footage and turning it into this beautiful end product.”
view more - Creative

Production Company: One at Optimus