On UK Budget Day, Dacia Has a Message for George Osborne

Publicis London campaign cleverly asks, what better way to say we’re all in this together? 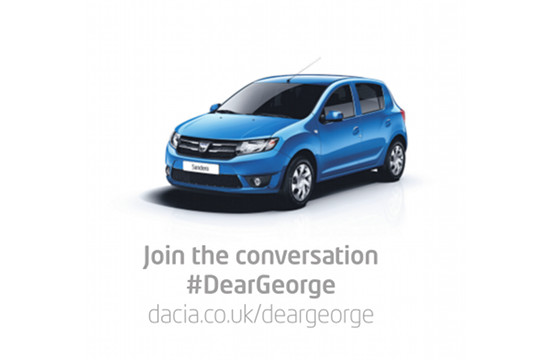 Dacia UK, the car manufacturer, is urging George Osborne to drive a Dacia Sandero, Britain’s most affordable car, to show he’s putting his money where his mouth is when he delivers the Budget this week.

Dacia is placing an ‘open letter’ (which you can see at the bottom of the page) to the Chancellor in the national press, addressed “Dear George” and suggesting that the Dacia Sandero, which costs from just £5,995, is the perfect car for him because “it’s solid, simple and doesn’t come with any frivolous extras”.

The letter ends with the line “What better way to say we’re all in this together?”

As part of the ‘Dear George’ campaign, created by Publicis, the brand is also communicating with Mr. Osborne via Twitter at the hashtag #DearGeorge.

#DearGeorge tweets directed at the Chancellor will appear alongside reactive tweets relating to ongoing discussions around the Budget. As Budget day dawns, the brand will be tweeting lines such as: “#DearGeorge Dacia cars are cleverly designed to avoid unnecessary spending. Sound familiar?”

People are invited to engage with the campaign by tweeting using the #DearGeorge hashtag. The public will be asked on Twitter whether they would like the Chancellor to consider driving the UK’s most affordable car and to vote on the issue on the campaign web page at dacia.co.uk/deargeorge.

The campaign launches on Wednesday, 19th March online, on Twitter and in national press including, The Times, The Telegraph, Guardian, Independent & i, Daily Mail, Daily Express, Metro National, London Evening Standard, City AM.

Andy Bird, the Publicis executive creative director, said: “'What better way for Dacia to celebrate Budget day than asking George Osborne to ‘do the maths’ by simply purchasing the totally non frivolous Dacia Sandero, and to really put his money where his mouth is in these austere times.” 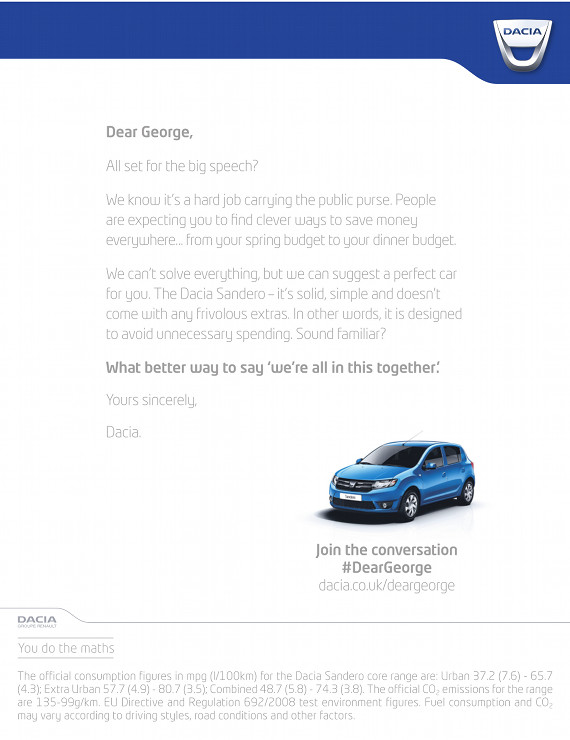