On Mexico Time with Corona Extra

Next step in ‘From Where You’d Rather Be’ campaign 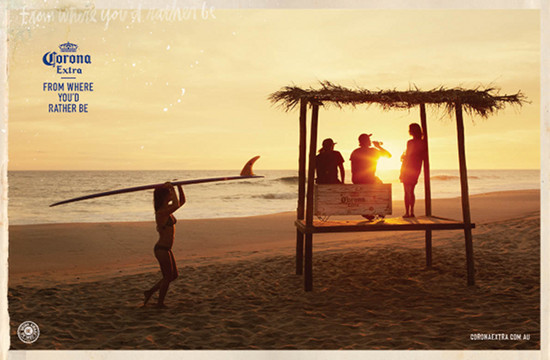 Today Corona Extra premieres ‘On Mexico Time’ the new campaign launching Australia wide from October 22.
Celebrated surf filmmaker Taylor Steele and photographer Chris Searl created ‘On Mexico Time’, a fresh take on Corona’s successful From Where You’d Rather Be campaign. With their previous collaboration for Corona notching up well over a million views, they had set the bar high.
Filmed in Mexico over two weeks ‘On Mexico Time’ took Steele, Searl and a handful of friends to all corners of Mexico, from Baja to the Caribbean and Pacific coasts, surfing each amazing break along the way.
The campaign was produced and developed by innovative Sydney based agency MC Creative.
“I’m not going to lie, shooting Corona is one of the best jobs going around. Drinking Coronas in Mexican beachside towns... the hardest thing is hitting focus” said Searl.
With Steele on directing duties and renowned photographer Searl on stills all that was needed was a killer soundtrack.
During a stint at Corona’s other project of the moment, La Casa Artist Residency, MT Warning wrote and recorded an acoustic track called Sinking Sun. As it turned out, the chilled out tune was the perfect match for the visuals.
On Mexico Time will be Corona’s largest campaign to date and will feature across outdoor, cinema, digital and print media across the Australian summer.
View the spot below: