On EU Referendum day, Captain Obvious Does the #VoteyCokey 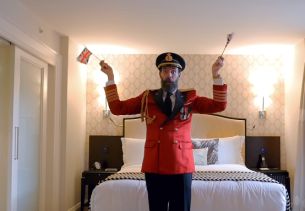 With polling day finally here, large numbers of UK holidaymakers have been searching for a break from Brexit according to new data from leading booking site Hotels.com.

Year on year search data shows that there has been more than a 35% increase in Brits looking to go on holiday on June 23rd than this day last year, meaning many travellers may miss the polls.

With neither side commanding a clear lead and with uncertainty surrounding the implications of a Brexit, it seems that some Brits are looking to make a break for the beach over the polling booth.

Simon Matthews, Senior PR Manager at Hotels.com Brand said; "Whether it’s the frankly abysmal weather we’ve been having or a desire to get away from all the talk of Brexit, we’ve definitely noticed a surge in UK searches for hotel check-ins on the day of the EU Referendum. Unless they’ve already sorted out their postal votes, these people obviously won’t be voting, possibly preferring to join the Brexodus to sunnier climes instead.”

The new search data comes at a time when Captain Obvious, the biggest fan of Hotels.com, can be seen getting into the British spirit of things ahead of the “big decision” in a social ad by Crispin Porter + Bogusky London, called the #VoteyCokey. Commenting on the very British dilemma of should we stay or should we leave, Captain Obvious said: “Brits taking a break from Brexit is the obvious choice. It gets my vote.”

This sentiment is supported by the locations of the surging search data. There has been an almost 100% increase in searches to Barcelona, around 70% increase in people looking to book Amsterdam and nearly 75% increase in searches for the German capital of Berlin. Conversely, non-EU destinations such as New York (Nearly 30%), Las Vegas (approximately 20%) and Tokyo (about 30%) are not quite as high in the search rankings.

Finally, a drop in search to UK destinations further highlights that these search patterns are linked to Brits looking for a break from Brexit. Searches for Edinburgh (over -30%), Manchester (almost -20%) and Glasgow (about -5%) in the same period all declined compared to the same time last year.