Omnicom Launches McDonald's Agency We Are UNLIMITED in the US

BBDO New York's Brian Nienhaus has been tapped as CEO 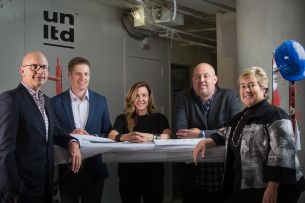 Omnicom today announced the launch of 'We Are UNLIMITED,' the new full-service advertising agency for McDonald’s in the U.S. Unlimited, as the agency will be referred to, integrates strategic, creative and analytical capabilities to deliver across all communications touch points – from online to mass, to in-restaurant, to intercompany – from one, integrated agency team. The agency also includes embedded teams from The Marketing Store (TMS), Facebook, Google, Twitter, Adobe,the T Brand Studio of The New York Times and others. Brian Nienhaus has been tapped as CEO, and will lead the team of  approximately 200 brand practitioners based in Chicago. He will report directly to DDB North America Chief Executive Officer Wendy Clark.

Wendy Clark stated, “Brian’s experience leading integrated teams that span digital, social, sponsorships and traditional advertising working across multiple Omnicom sister agencies, many of whom are part of Unlimited, has uniquely qualified him to take the reins as CEO of this agency.”

“I’m incredibly honoured to assume a leadership role in changing the way agencies deliver client solutions. To do so in partnership with McDonald’s, one of the world’s most iconic brands, and the stellar team we’ve brought together, is both exciting and humbling,” said Nienhaus.

Nienhaus comes to Unlimited from Omnicom’s BBDO New York, where he led the AT&T corporate brand and Business Solutions accounts. Prior to that, he led Team Sprint, a multi-agency, data-led integrated team devoted to Sprint communications at Digitas Chicago. Earlier in his career, he spent six years with Cramer-Krasselt leading accounts as varied as Hilton, Hyatt, Zantac, Glaxo, Merck and Under Armour. Throughout his career in advertising, Nienhaus has worked for some of the largest global agencies on a broad array of brands, including Ford, Nokia, Microsoft, 3Com, Gateway, Challenge Butter and Sara Lee.

John Hansa, Executive Creative Director, joins the agency from Leo Burnett Chicago, where he was responsible for running the creative portion of the McDonald's business. He brings over 27 years of award-winning advertising experience on a variety of blue-chip accounts.

Graceann Bennett, Chief Strategy Officer, is an experienced planner and thought leader who has led brand strategy at four major global advertising agencies, including Ogilvy. She has stewarded successful integrated creative campaigns for Dove, Volkswagen, Guinness, Wonderbra, and even a world religion.

Chip Knicker, Chief Digital Officer, joins Unlimted from Accenture, where he managed their North American eCommerce practice. During this time, he managed the eCommerce delivery organization from a client delivery, staffing, recruiting, and people management perspectives.

Jon Ellis, Chief Production Officer, has over 20 years of experience working in digital, new media, and traditional broadcast production. He joins Unlimited from DDB, where he served as Executive Integrated Producer.  He has produced integrated campaigns for brands including Capital One, State Farm, Wrigley, and McDonald’s.

Linda Poe, Chief Financial Officer, spent nine years with Element 79, an Omnicom agency, as the company’s Controller. She joins Unlimited from Fathom Communications, where she has been the agency’s CFO.

Ursula Ostrom, Senior Vice President, Group Director, will be embedded in Unlimited from The Marketing Store (TMS), where she served as s Senior Vice President, Account Director. She has 15+ years of both above and below the line marketing and advertising experience.  Her expertise in both the development of business driving strategy coupled with execution of work has crossed multiple industries with a diverse list of clients including McDonald's, Disney, Bayer and Alberto Culver.

Nienhaus said, “Along with these key executives, we have hired dozens of associates and are well on our way to being fully staffed by January 1, 2017. Indeed, the future looks Unlimited.”