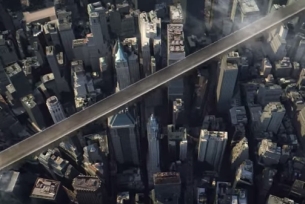 Tiffany and Co. and Ogilvy & Mather New York have launched a new spot paying tribute to the iconic city of New York in promotion for the new CT60 watch for men.

In the new spot, ‘New York Minute’ the historic foundations of hardwork and passion that New York City was built on are celebrated through visually captivating imagery and inspirational words. The film depicts triumphant people of NYC defying failure and discovering inspiration, showing that truly anything can happen in a New York minute.

The ad celebrates history, as over 150 years ago the founder of the historic jewelry brand, Charles Tiffany placed one of the first mainstay clocks in NYC outside of Tiffany & Co.’s store. Soon after, New Yorkers began setting their watches to the clock, which then set the pace of their busy lifestyles and the New York Minute was established. With this ad, Tiffany &  Co. honors Charles Tiffany’s involvement in the New York Minute, with the new CT60 watch which was built by the Swiss, but actually inspired by the city that put horology on the map.

Ogilvy's Kaleeta McDade on Why “Time Is the Newest Experience Currency”