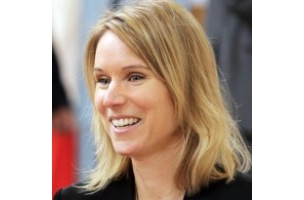 Falusi will drive the creative vision of the New York agency, and in her new role, Corinna will report to Chris and partner closely with Adam Tucker, President, O&M Advertising New York.

In her time at Ogilvy & Mather Advertising New York, Corinna has led some of the agency’s most breakthrough work across Coca-Cola, Fanta, Ikea, Spotify, and most recently Coke Zero.  In addition to her new responsibilities, she will continue to lead the Coca-Cola and Ikea business.

"Corinna was an obvious choice when deciding our new creative leadership structure within Ogilvy New York,” said Chris Garbutt, Chief Creative Officer, Ogilvy & Mather New York. “She has the ability to inspire her teams and always delivers nothing but the best creative product. Most importantly, she is universally respected by our agency and our clients. I have no doubt that Corinna will raise the creative bar of O&M Advertising."

“Leading the creative portfolio of O&M Advertising New York is one of the most challenging roles in the industry,” said Lou Aversano, CEO, Ogilvy & Mather New York. “We have an excellent Advertising leader in Adam Tucker who continues to build great momentum for our advertising discipline. We’re confident Corinna’s passionate and fearless leadership will take our creative output to new levels and I believe their partnership will prove to be unstoppable.”

Falusi began her career working at some of Europe’s most creative agencies including Jung von Matt, Germany’s most awarded agency, and StawberryFrog, in both Amsterdam and in New York where she led integrated efforts for the launch of a number of Frito Lay brands as well as the global digital Pampers account and worldwide launch campaigns for Heineken, New Balance and others.

Her work for the non-profit organization Nanhi Kali, helping Indian girls receive the education they deserve, won nearly every award including a gold and bronze One Show Pencil and 2 Cyber Lions and helped name Strawberryfrog as one of the top 20 best digital agencies 2011 (by Pencilrankings).

Falusi’s work has been recognized by every major award show, including D&AD, Cannes, TED, and One Show, and she has judged various national and international award shows, such as the D&AD, ADC, AICP, Webbys and One Show.