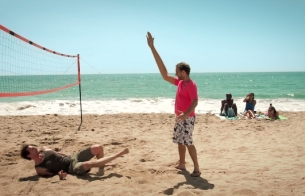 Sure DSLR cameras take great photos and videos, but what about the dangers of DSL-ARM, the serious condition in which the heavy weight of DSLR cameras cause users’ arms to grow significantly longer than the other? That’s the hilarious premise behind a disruptive new online ad campaign from Boston-based ad agency The Fantastical for Olympus’ new OM-D E-M5 Mark II DSLR camera.

“The Olympus OM-D series has been a disrupter in the camera world because of its light weight and power,” Michael Ancevic, Fantastical’s Managing Partner/Chief Creative Officer, says. “We wanted a campaign that was equally disruptive for this innovative camera. We needed a something that got people’s attention and was unlike anything else in the camera category. There are a lot of ads that don’t breakthrough in the high-end camera sector – but this one certainly does.”

Stephanie Sherry, Marketing Director, Olympus adds, “We know that consumers are really looking for an option for their big, heavy bulky DSLR’s.”

Directed by the up and coming directing team of Morehead & Benson, who were recently named by Variety as “Directors To Watch” on the heels of the success of their indie feature “Spring,” the spot uses a ‘mockumentary’ approach, complete with a first-person voiceover and a video montage to highlight how DSL-ARM affects one sufferer while on vacation. In the spot, we see him swimming in circles, accidentally hitting another woman when trying to put his arm around his wife, struggling mightily to eat spaghetti and scarily dominating a friendly game of volleyball.

In addition to the 30 and 15 seond versions, there is also 3-minute long-form piece that will live on Olympus’ social media networks and at www.getolympus.com/dslarm.

“We felt the campaign would be funnier if it was played seriously and not try to be too broad or slapstick-y,” Ancevic notes. “The humor needed to have a level of empathy for this regular guy afflicted with DSL-ARM and it needed to read as being funny quickly so we could show numerous scenarios depicting his struggles throughout his vacation. Moorhead and Benson understood the subtle and sophisticated humor that the concept required right away.”